Eight American tourists have been killed and 21 injured when their bus collided with a truck near the southern Egyptian city of Aswan, police officials say.

The bus carrying 37 tourists from the US was headed to the ancient Egyptian Abu Simbel temples on Sunday when it collided with a damaged truck parked on the side of the road, the official MENA news agency said.

A police official said six of the dead were women. The bus driver and a tour guide were also injured in the crash, which occurred early in the morning about 30km from Aswan.

Four tourists were in critical condition, the police official said, adding that the injured were taken to a military hospital in Aswan.

Barack Obama, the US president, who is on holiday in Hawaii, was briefed on Sunday on the “tragic accident that took the lives of a number of American citizens in Egypt,” the White House said in a statement.

The US embassy in Cairo said it was “deeply saddened by the traffic accident in Aswan that has led to deaths and injuries among American tourists”.

Seventy-nine tourists on board two other buses in the convoy were unharmed, MENA reported.

Eighteen French tourists were injured when their bus overturned on the same two-lane desert road in January. In October, six Belgian tourists were killed in another crash in the south.

The government estimates that there are 8,000 road accidents a year in the country.

Last month, eight foreign tourists were killed when their tour bus lost control and flipped over several times on a mountain road near a resort on Egypt’s Red Sea coast.

The 3,000 year-old granite Abu Simbel temples are a popular tourist attraction, known for four colossal statues built during the reign of Ramses II and dedicated to the god Amun.

During the 1960s, they were relocated to their present location, about 300km from Aswan to prevent them from being submerged by rising waters from the Aswan Dam, which was under construction. 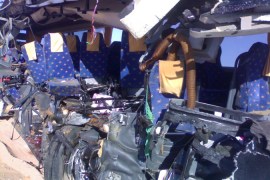 Many dead in Egypt car crash

Bus carrying American tourists collides with a truck near southern city of Aswan. 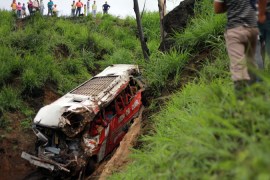 Accident happened after bus plunged about 1,100 feet off foggy, rainy mountain in western provice of Manabi. 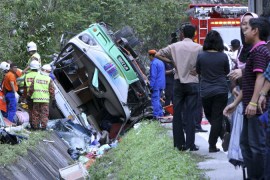 Tourist bus on way back from hill resort tips over on highway, killing 25 Thai visitors, as well as three Malaysians.