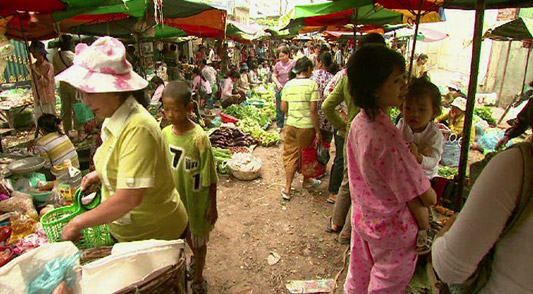 Cambodia could lose millions of dollars worth of international aid if it fails to tackle rampant corruption. That’s according to Robert Zoellick, the World Bank president, who visited the region over the weekend.

There now are fears that the recent discovery of off-shore oil could add to the problem. Al Jazeera follows the trail of Cambodia‘s latest secret.

Cambodia is one of the most corrupt countries in the world, ranked 151 out of 163 in a global corruption list.

Anti-corruption laws have remained in the “drafting” stage since 1994, but have never been implemented.

The World Bank has issued a stern warning to the Cambodian government, saying that anti-corruption laws were a key element.

“And it’s not only passing the law, but its implementing it,” said Zoellick.

Meanwhile, the oil and gas reserves discovered off the country’s south coast have already been divided up for exploration and production.

So although the fossil fuel find is estimated to be worth $80bn, it could be more of a curse than a blessing for the average Cambodian.

In the villages of southern Cambodia, people are living in poverty. But not far away from there lies a potential fortune.

Cambodia, where one-third of its population live on less than 50 cents a day, has discovered oil but the government is keeping the find under wraps.

Strangely though, the government is keeping much of the detail secret.

Theary C Seng, of the Centre for Social Development, said the government should have “clearer and more transparent procedures and information” about the oil discovery.

“Ultimately this is our money and we want a say in it,” he said. “This is why the government needs to be transparent and engage the public. It’s not their money. It’s the public’s money.”

The sleepy coastal town of Sihanoukville is likely to see the first signs of major development, and poised to become the heart of the local oil industry.

Al Jazeera has learned that the Cambodian government has now completed contractual negotiations with 13 foreign companies for 100 per cent of the country’s off-shore oil and gas reserves.

This it has managed to do without informing either the parliament or the public, and there are no guarantees as to how the profits will be spent.

Te Duong Dara, from the Cambodian National Petroleum Authority, has led negotiations on behalf of government and is optimistic about the future despite the absence of anti-corruption and freedom of information laws.

“I know people talk about the anti-corruption laws or something, but for me what is important is the spirit of the people,” he said.

According to him, there is no indication of how long the oil reserves will last, or how much they will be worth.

But confidential documents prepared for the oil industry and obtained by Al Jazeera reveal clearer details.

It says oil reserves should last 20 years, and projects that government revenue would hit between $3-$4 bn annually at current values. On last year’s figures, that is 50 per cent of Cambodia’s GDP.

But even some of the politicians are being prevented from getting that information.

Keo Remy, an opposition legislator, said: “Right now we know nothing about the oil”.

At the markets in the capital, Phnom Penh, Cambodians shop with a weekly budget of less than $10. This is where oil revenues could make a real difference.

But Cambodians are all too aware that oil could turn out to be a curse. For now, though, there’s a belief they will share in the spoils at the end of the rainbow.