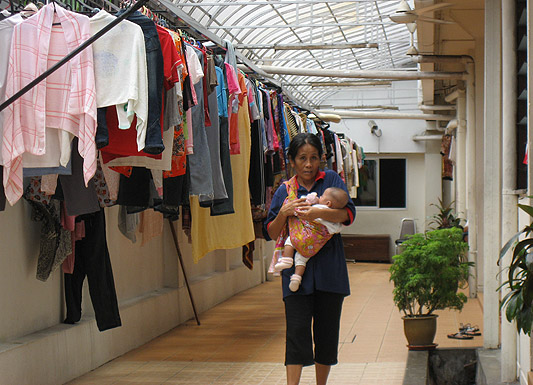 Malaysia, one of the richer Southeast Asian nations, hosts about two million migrant workers from around Asia – more than 300,000 of whom come to work as domestic helpers or maids.

Some 90 per cent of Malaysia‘s maids come from neighbouring Indonesia; almost all from a background steeped in poverty and hardship. 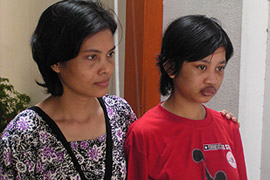 They leave home with the hope that an overseas job will help ease the financial burden they and their families face.

But a series of recent cases has highlighted the risks Indonesian maids face in coming to work in Malaysia.

Most of the complaints are about unpaid wages, but others have reported incidents of beatings at the hands of their employers, torture and sexual assault.

In mid-August, the bruised body of one maid, a 24-year-old name Kunarsih, was found at her employer’s home in Kuala Lumpur.

Police have questioned the couple but no charges have been filed and the case remains unresolved.

Earlier in the same month, Parsiti, another maid from Indonesia, was rescued from the ledge of a Kuala Lumpur apartment block after she climbed down from a 22nd-floor apartment to escape abuse.

In a similar case in June, fire fighters rescued 33-year-old Ceriyati Dapin from a 12th-storey ledge.

She had climbed down three levels using a makeshift rope made from towels, sheets and clothes – driven to desperate measures, she said, by an abusive employer.

The growing incidence of such cases have drawn calls for action from labour rights groups and raised tensions between Indonesia and Malaysia.

Speaking to Al Jazeera, officials at the Indonesian embassy in Kuala Lumpur said they were seeing complaints from more than 1,000 maids a year, but despite this the Malaysian government was failing to act against errant employers. 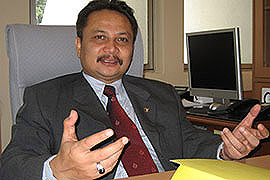 “The most common grouse of runaway maids are unpaid wages, physical abuse and torture,” says Tatang Razak, the Indonesian consul in Kuala Lumpur.

Earlier this year the embassy, faced with a growing number of runaway maids, converted a portion of its premises into a special shelter.

The dormitory-style building currently houses at least 80 maids, who are given food and other necessities as well as simple bunk-bed accommodation.

At the time of Al Jazeera’s visit, several of the maids in the shelter were caring for babies, while another one was due to deliver soon – embassy officials said they were victims of alleged rape.

Since it opened hundreds of maids have passed through the shelter, repatriated after protracted negotiations over wage disputes were resolved by the embassy.

About the same time as the shelter was opened, the embassy also formed a special unit aimed at stepping up protection for all Indonesian nationals working in Malaysia.

Tatang, the consul who chairs the unit, said despite numerous police reports lodged by the embassy no employer has ever been punished.

“It’s unfair to the women because they came here to work but are now forced to spend time waiting for some kind of justice… and all the while the employers are walking about freely or out on bail,” he said.

Malaysian government officials did not respond to repeated requests for comment or interview from Al Jazeera. 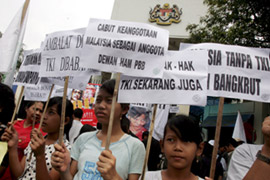 “The Malaysian government is not being transparent. It is not prompt with investigations and prosecutions. That is why people in Indonesia are very angry,” Tatang said.

Since the late 1990s, Malaysia and Indonesia have signed several agreements to protect the rights of domestic workers, each time with revisions aimed at improving the working conditions of the maids.

He said the abuse of maids begins at the village level, where a well-established network of agents controlled by well-connected maid agencies in Malaysia recruit young women desperate to escape extreme poverty.

“The women already owe money to the recruitment agency, sometimes as much as RM3,500 ($1,000), before she even left her village,” he told Al Jazeera.

Once in Malaysia, the maid has to open a bank account and surrender both her passport and ATM card to her employer, a common practice to ensure she does not run away, said Ong.

The maids here have no access to healthcare, they suffer sexual and physical violence, and are made to work 12-14 hours daily

In 2006, Indonesia signed a memorandum of understanding agreeing that maids should be paid directly by their employer, receive some – albeit small – compensation for personal injury and be given time off in lieu of overtime.

Despite this, Ong said, it remains common practice for employers to deposit the maid’s wages with the recruiting agent as repayment of earlier debts, meaning she never actually sees her money.

“It costs more than RM6,000 to hire a maid, the bulk of which is actually agency fee,” he said. “This is why maids are overworked.”

“The abuses are getting worse and no action is taken to address the problem.”

According to CARAM Asia, a Kuala Lumpur-based group which monitors regional migration and health issues, one of the reason maids come to suffer abuse is that many employers deliberately cut off their maid’s contact with the outside world.

She said although cases of maid abuse were reported in other host countries, such as Singapore and Hong Kong, Malaysia was among the worst.

“Cases of abuse also exist in Hong Kong but they are mostly verbal, not physical like what we see reported in Malaysia,” she told Al Jazeera.

“The maids here have no access to healthcare, they suffer sexual and physical violence, and are made to work 12-14 hours daily.”

She said Hong Kong was relatively better among Asian countries because it had a law that provided a standard minimum wage set at HKD$3,400 ($437) for foreign domestic workers.

“The law says domestic workers must be given a day off every week and a minimum seven days annual leave,” says Valentina Soe.

Hong Kong though, remains the exception rather than the rule, and in Malaysia, like many other countries in the region, domestic workers are generally denied even the most basic labour rights.

Regional non-governmental organisations are now trying to use Hong Kong‘s model to lobby for recognition of maids as workers with legal rights.

For the army of maids in millions of households in Asia, advocates say this recognition could afford them the break they deserve after risking everything they had to escape a life of poverty.