Ceriyati Dapin, 34, moved to Malaysia from Indonesia hoping to escape grinding poverty in her home village by working as a domestic helper or maid.

In June she staged a dramatic escape by climbing down the ledge of a high-rise condominium in a desperate bid to flee what she says was months of abuse at the hands of her employer.

Speaking from a shelter at the Indonesian embassy in Kuala Lumpur, she tells Al Jazeera her story: 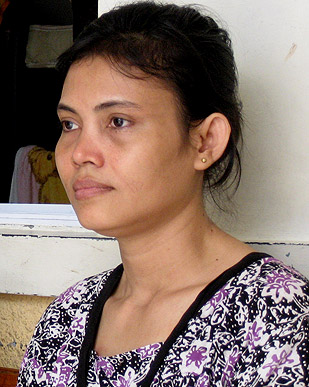 I am from Poncol, central Java. I have a son aged 15 and a daughter aged six.

Last year a sponsor asked me if I wanted to work as a maid in Hong Kong.

He said it was only for two years and I could make a lot of money.

I accepted because I wanted to help my husband as well as for my children’s future.

Later I decided to go to Malaysia instead because I was afraid of having language problems in Hong Kong.

I left my family with a heavy heart and headed to Jakarta, where I underwent maid training for four months.

We were taught how to bathe a baby, to clean a house, to do the laundry and learn the name of kitchen utensils and how to use them.

I was trained for another month in Malaysia by a maid agency before being sent to serve my employer’s mistress.

Everything was going well for the first two weeks until she began hitting me with a metal dustpan and a stick. My neck was sprained and I was in terrible pain. I could hardly turn my head.

I was not given food whenever she was unhappy with my work. I could not even drink water from the tap without her permission. I slept on the plain tiled floor with only a pillow and a blanket.

I was locked up inside the house all day and cut off from my family back home. It was like being jailed.

The Malaysian agent told me my wages won’t be deducted, that the employer will pay me directly. But I was never paid.

When I managed to contact the agent I pleaded for another employer but he just ignored me. I cried everyday, regretting the day I left home.

The last straw came when I was asked to help finish some office filing work that she had brought home but I couldn’t do it because my whole body and neck were aching.

She beat me for three consecutive days. I just couldn’t take it anymore.

That’s when I decided to escape no matter what happens. I tied up clothes to make a rope and climbed down, thinking that it was better to risk death than to continue suffering.

I never ever want to leave my family again.