In her role as senior researcher at PHR, Tamaryn Nelson works as part of the Research and Investigations team in their efforts to document and expose ... war crimes and mass atrocities. She helps design and conduct rapid response and longer-term field investigations in partnership with volunteer consultant health professionals; cultivates networks of contacts among local and international stakeholders; and writes reports and communications materials documenting and publicizing research findings. Nelson has nearly 20 years of experience working with survivors, local activists, NGOs, governments, donors, journalists, and public figures. Prior to joining PHR, Nelson held a variety of research and managerial roles for several groups, including Amnesty International, Planned Parenthood, and the Center for Justice and International Law. She also created and led the Latin America Program at WITNESS – an NGO founded by British musician Peter Gabriel to document human rights abuses through video technology. Nelson has also spent several years as a consultant, and has managed assignments for a variety of institutions, including the Oak Foundation, the UN Fund for Population Action, and Harvard University. Nelson holds a Masters in Public Administration from the Harvard Kennedy School of Government, where she was a Jorge Paulo Lemann Fellow. She also earned a certificate in International Human Rights Law from Oxford University and a BSFS in Foreign Service from Georgetown University. She is fluent in Portuguese and Spanish, with a basic understanding of French.

The Trump ad­min­is­tra­tion is us­ing a wide range of cru­el poli­cies to stop peo­ple in need from seek­ing safe­ty in the US. 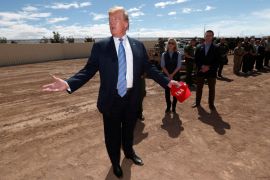