Omar Khalifah is an associate professor of Arabic literature and culture at Georgetown University in Qatar. He received his PhD from Columbia Universi... ty in 2013. In addition to modern Arabic literature, Khalifah’s research interests include Palestine studies, memory studies, world literature, and cinema and nationalism in the Arab world. His book Nasser in the Egyptian Imaginary was published by Edinburgh University Press in 2017, and his articles have appeared in Middle East Critique and Journal of World Literature. A Fulbright scholar, Khalifah is also a novelist and short story writer in Arabic. His Arabic publications include the short story collection Ka’annani Ana (As If I Were Myself) and the novel Qabid al-Raml (Sand Catcher). He has taught courses on the Arabic novel, film and memory, and migration and exile in Arabic literature. 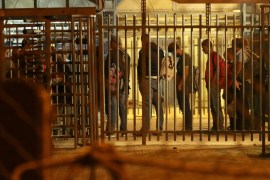