Cox’s Bazar, Bangladesh – Gul Zahar is the head of four generations of family and the bearer of 40 years of suffering. A Rohingya refugee in her 90s, she has fled persecution in Myanmar on three separate occasions in her life: first in 1978, then in 1991 and, finally, in 2017.

Like many other Rohingya members of her generation, Gul isn’t exactly sure how old she is. And while she readily admits her advanced age may keep her from remembering everything, Gul also insists she’ll never forget the constant horrors she says her family suffered at the hands of security forces in Myanmar over the decades.

Inside the hut she now calls home, Gul, who is remarkably alert, speaks softly and slowly.

“They beat us,” says Gul in a voice so low it almost belies the brutality she is describing. “They kidnapped us. They detained us.”

“We struggled with everyday life, earning a living and moving around,” explains Gul before going quiet. As her eyes begin to drift, a pained expression appears on her face – as though Gul had suddenly been confronted with more details of a past she wished had never come back into focus.

Bonded through blood and displacement, they now all live in a single, small dwelling constructed out of bamboo and tarpaulin; the kind of makeshift shelter that, by all appearances, seems unlikely to be able to withstand the pounding rains this current monsoon season will bring.

Gul and the rest of her family members residing here at the Kutupalong Camp in Cox’s Bazar, Bangladesh – including her son, daughter-in-law, grandchildren, great-grandchildren and more – span almost a century in age.

In retaliation, the Myanmar military is reported to have burned dozens of Rohingya villages and fired indiscriminately at unarmed men, women and children.

Myanmar’s army has denied the reports of atrocities against Rohingya.

Now 53, Oli’s demeanour is both kind and stern. Speaking outside his family’s hut, he wears the kind of protected expression that can only be learned from a life of having seen too much misery and experienced too much injustice.

Under grey clouds that threaten rain at any minute, Oli recalls the sheer terror of what happened when Myanmar’s military descended upon them last year.

“They set the village ablaze,” says Oli, “firing on people, killing people. They cut people. They slaughtered people. And we escaped out of fear.”

When Oli speaks, he does so matter-of-factly, in a manner seemingly devoid of emotion. But his words convey the kind of dread most people would have trouble processing, let alone understanding.

“If we couldn’t have made our way here,” he says, “we would have been killed like stray dogs.”

Oli explains how, throughout his life, the Rohingya haven’t been bestowed even the most basic rights and freedoms.

He then adds: “We want peace … We want to be granted Rohingya citizenship”.

Learning more about this particular family, it becomes clear their experiences – both inside and outside Myanmar – mirror what’s happened to so many other Rohingya.

Having faced decades of repression and abuse, the Rohingya aren’t just the world’s largest group of stateless people, they’re also among the world’s most persecuted minorities.

‘Most vulnerable on earth’

The United Nations has called Myanmar’s military operations against the mostly Muslim Rohingya in Rakhine State in 2017 a “textbook example of ethnic cleansing”.

As a result, more than 700,000 Rohingya have fled Myanmar – a situation that’s become one of the world’s fastest-growing refugee crises in decades.

During a visit to Bangladesh last week to highlight the plight of the Rohingya, UN Secretary-General Antonio Guterres described the Rohingya as, “one of the most discriminated against and vulnerable communities on earth,” and called the Rohingya refugee crisis, “a humanitarian and human rights nightmare”.

Upon completing his tour of Kutupalong Camp, Guterres urged the international community to do more to help, adding how, “nothing could have prepared me for the scale of the crisis and extent of suffering”.

Mohammad Ayub,31, is Gul’s grandson-in-law and father to her great-grandchildren. Voluble and expressive, when Mohammad talks, the outrage is audible in his voice and the anger is visible on his face.

He says he’ll always be haunted by the crimes he witnessed security forces commit back home.

“They were grabbing people and shooting them,” describes Mohammad as he winces. “And in some cases, they would beat them to death with the butt of their guns.”

Mohammad struggles as much with the grief over family members who were killed as he does over the friends and relatives who went missing.

“Nobody could even ask questions about the forced disappearances,” says Mohammad. “Even a brother didn’t have the right to ask about his missing brother. You understand? We had no clue who was disappeared and to where. We just had to remain silent about it.”

More than anything, Mohammad wants his children to be granted citizenship and to experience the kind of peace and justice he’s never known. He says there’s only one way that can happen.

“Atrocities that have been committed against our men and women should be heard by the International Criminal Court so that we get justice,” says Mohammad.

By Mohammed Jamjoom
More video clips from the story 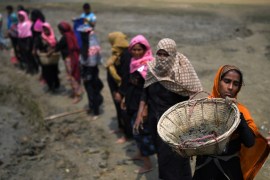 United Nations secretary-general says as many as 200,000 Rohingya need to be relocated due to monsoon rain threat. 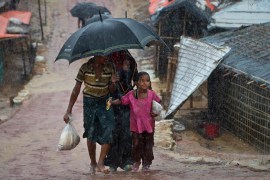 The UN estimates that about 200,000 Rohingya refugees, including over 100,000 children are threatened by flooding rains. 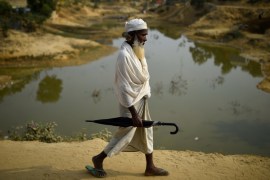 Will the Rohingya ever get to go home?

The chief of the International Committee of the Red Cross doubts Myanmar repatriation. 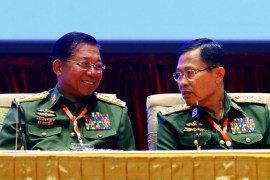