There are an estimated 100,000 members of the Druze community in Israel.

Founded in the 11th century, the Druze religion is an offshoot of Islam. There are about one million Druze worldwide, with most living in Lebanon, Syria and Israel.

In Israel, the Druze are the only Arabs, apart from the Bedouin, who serve in the Israeli army, but being an Arab in the Israeli military brings its own unique challenges.

In Conflict of Loyalty, filmmaker Bilal Yousef followed Israeli Druze Yamin Zaidan as he confronted the hard questions of loyalty and identity faced by the Druze in Israel today.

In 1956, Israel’s law of conscription – which makes military service mandatory for male and female citizens beginning at the age of 18 – was applied to Israel’s Druze community.

“I was supposed to serve in the army in 1996, but that same year my second brother Saleh, who was an officer [in the Israeli army], was killed by Hezbollah in Lebanon, so I was granted an exemption [from military service],” Yamin explains.

His other brother, Fouad, was a policeman who was killed in the line of duty in the West Bank.

“Personally, I didn’t want an exemption. I wanted to be in a fighting unit. But my family wouldn’t agree. I started studying economics and administration and worked in our local council as an accountant. But I still felt inferior because I didn’t get to wear the military uniform.”

“The life we live is completely dependent on Israel. There is an umbilical cord between the Druze and the Israeli state,” Yamin explains.

“We were born in a specific environment and an educational system. Our families are in the police, our brothers in the army, so what do you expect from me?”

With his aspirations of serving in the Israeli military or police force crushed, Yamin decided to join the Israeli prison administration as an accountant.

But after several months he decided to go to law school. His schedule there conflicted with his work at the prison, so he gave up his job as an accountant and instead became a prison guard.

At that time there were many high-profile prisoners at Yamin’s prison, including Samir Kuntar, a Lebanese Druze who was given five life terms for a triple murder in 1979, and Marwan Barghouti, a popular Fatah leader who is serving five life sentences.

“Serving in section three was my first encounter with political prisoners and of course I had preconceived notions about them being responsible for killing children, women and old men,” Yamin says.

“But my interaction with them forced me to question my preconceptions. They were not what people had told me. They were educated, meaning you were talking with a person who was intellectual and polite.

“To be able to converse with him and reach his level meant you needed to learn and spend more time and break bread with them. So we got to know each other more. And from then on I started to change my perceptions.”

His interactions with the prisoners made Yamin question his own identity.

“This made me go back and re-read history. Little by little I began to discover some sort of truth, and I discovered I was heading in the wrong direction.”

He decided to take four months off work to sit at home and reflect on just where he belonged.

“I reached the conclusion that no matter how much I was in solidarity with them [the prisoners], and how much I helped, as long as I was wearing this uniform I would always be the other.”

Yamin’s wife says she was confused when he told her of his decision to leave the prison service.

“I tried to tell him to go slowly. I didn’t even know what to tell him or how to respond. I realised that my inability to respond to Yamin was proof that he was right,” she says.

“There were people who hated and rejected us, people who didn’t want us. But they were Arabs just like us. They see me as the other, as the enemy.”

For Yamin’s sisters, his decision was hard to take.

Najwa, one of Yamin’s sisters, explains: “It is not easy for someone to be a policeman then change his principles and mingle with security prisoners. This is revolt, it’s extreme.

“This was very surprising to us, something strange to the nature of this family. It’s a new kind of terminology that I find it difficult to be convinced of.”

Fida’a, another of Yamin’s sisters, says the family tried to show him that they were unhappy with his decision.

“It was hard, very hard. At first we objected … because we were worried about him. All our lives were going along one path, then all of a sudden there was another path.

“There were many contradictions and we were willing to do anything to make him change his mind. But Yamin’s beliefs were deeper and stronger.”

“I can fool others, but I cannot fool myself,” Yamin says.

Before he resigned, he spoke to Samir Kuntar about his feelings.

“I told him I couldn’t continue like this and I wanted to continue school and if I became a lawyer, I would work with political prisoners. He told me he would be the first to sign me up as his lawyer.

“When I finished school, I sent a request to visit him. When the prison found out I was coming to visit Samir they were very confused.”

Kuntar – then still a prisoner in Israel – kept his promise to Yamin and, after having been his prison guard, Yamin became his lawyer.

Yamin started to work at the ministry of prisoner affairs run by the Palestinian National Authority.

Kuntar was released in July 2008 as part of a prisoner exchange deal with Hezbollah, but today Yamin continues to defend other prisoners. 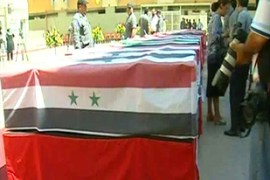 Families mourn the bodies of 21 fighters released in a prisoner swap deal. 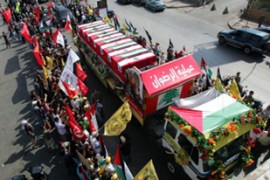 Kuntar says he will continue “resistance” as Israeli PM condemns him as “animal”. 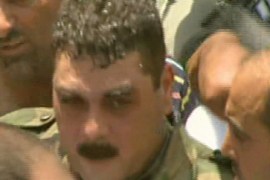 Samir Kuntar returns to his home town in Lebanon after his controversial release. 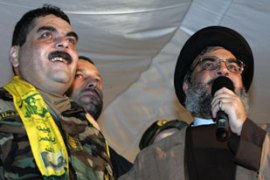