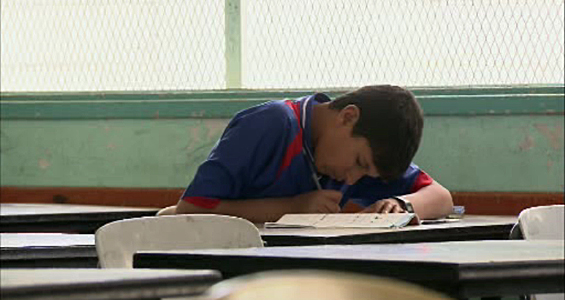 Universal education was one of the central pillars of the UN’s Declaration of Human Rights 60 years ago.

In a special programme, beginning in Gaza, Al Jazeera finds out how such rights are difficult to uphold in conflict zones.

There are many things that distract a child from his or her school exams but an exploding jeep and loud gunfire are rarely top of the list.

But that is exactly what forced 10-year-old Wala Mohammed Smairi and her classmates to hurriedly abandon work on one of their end of year tests.

“Fighting broke out so we threw the exam papers down and hid under the desks,”  she says. “We were crying and shouting and the teachers told us to hide.

“We were stuck in the classroom they couldn’t evacuate us because the bullets were whizzing past the school.”

Such violent traumas are sadly not isolated incidents for pupils at Al Maari school in Al Karara, a rural village on the outskirts of the Gazan town of Khan Younis.

The noise of bullets, rockets and tank fire is the regular soundtrack for children in the playground – sounds that are so common they are largely ignored by both pupils and teachers.

“The Israeli barrier stretches all along the eastern border of the Gaza Strip,” Layla Muhanna, the school’s deputy head, explains.

“It’s about two kilometres from the school so if anything happens they [Israeli soldiers] are at our doorstep within 10 minutes.”

Despite education being a central pillar of the UN Declaration of Human Rights the incessant conflict between Palestinians and Israelis means such rights are, in reality, difficult to uphold.

Statistics show that the exam success of almost every child in Gaza is likely to be badly affected by conflict and doctors say 90 per cent of children under 11 reveal physical signs of stress.

Much of the area around the school, once populated by olive groves and family homes, has been flattened by a series of incursions. Now the area is a wasteland.

Teachers at the school say such incursions into the village happen several times a month, moves often provoked by Palestinian rocket attacks into Israel.

Many children have difficulty in physically going to and from school.

“Of course we are human beings too, and we get scared,” Muhanna says. “But we have to control our fear in front of the students, because if they feel that we are afraid that will unsettle them more.”

Wala says her home has also been raided on several occasions and that the insecurity has caused her grades to suffer – albeit she now only scores 97 per cent compared to 100 per cent previously.

It is not only the incessant fighting that can cause such a dip in performance. Electricity as with all supplies in Gaza, is erratic and frequently cut for days at a time, meaning ambitious students like Wala often have to study by candlelight.

Despite the fear and instability in their lives most of the students at Al Maari are enthusiastic about learning, but it is when they get older and become teenagers that their concentration wavers.

“We did a study on 3,000 children in Gaza,” says, Dr Eyad al Saraj, a child psychologist. “Forty-five per cent of them said the worst thing they have witnessed was the beating of their fathers by the Israeli soldiers. That was the symbol of security and power for them and it was shattered.

“Many children find in their neighbourhood new symbols to replace their father who was shattered as a symbol of power and security. They found new models such as the man with the Kalashnikov and they became themselves violent and perpetuating violence again and again in different cycles.”

It is evident among younger children too that constant conflict affects their ability to study or to perform well in exams.

“It affects [them] so much. When incursions occur, the kids stay up at night,” Muhanna says. “They come next day to school so sleepy, unable to concentrate. They don’t do their homework.

“In the last term there were many incursions and as a result the grades of the students have dropped significantly – because they have no opportunities to study.”

In one art class that Al Jazeera attended nine and ten-year-olds were asked to draw images of the recent Israeli incursion.

One girl chose not to draw images of violence at all, instead depicting flowers and an eye. But even this is actually a reflection of the conflict.

“The eye sheds tears. It sees and feels all harm caused by the soldiers,” Hala says. “The eye sees everything.”

There is a strong correspondence between Hala’s all-seeing eye and the surveillance cameras the Israelis use to monitor Palestinian activities.

Israeli cameras can certainly penetrate the darkest corners of Gaza. The military showed Al Jazeera a series of night-vision images, which they say reveal Palestinian resistance fighters using a school – not Al Maari school – as cover for a rocket attack on Israel.

“Sometimes on my way to school I bump in to members of the Palestinian resistance, like the al-Qassam Brigades or the Palestinian Executive Force,” Hala says. “I don’t get scared. It’s normal.”

Despite the surrounding violence the majority of Al Maari students are still keen to learn and education is seen as a central pillar to the future of Palestine.

Indeed, the Palestinian Authority has some of the highest literacy rates in the Middle East – more than 92 per cent according to UN development figures.

Fatma Al Sumairi, Al Maari’s headmistress, has the responsibility for ensuring that students are safe when fighting breaks out and that they are properly sheltered.

But as she spoke to Al Jazeera the very dangers she was describing erupt and another example of the tragic future that may face them is demonstrated.

A Qassam rocket is fired into Israel by Hamas fighters and Israel responds within minutes via rockets dispatched by a drone.

Amid the panic it is unclear who the victims are but it later emerged that two Hamas fighters were hit – one was killed, the other severely wounded.

The dead man was identified as 23-year-old Tharir Abdul-Ghafour, a highly-regarded second year physics student at Gaza University – and a former student at Al Maari school.

His death was actually witnessed by some of the teenage boys currently studying at the school.

“Me and my cousins were having tea outdoors and we heard the firing of missiles.  We got up to look because I like seeing the missiles going off. It’s a hobby,” Ziyad says.

“The rocket went straight into his chest here and came out the other side. The shrapnel went into his face,” Hazem, another of the boys, says.

“When you’re watching someone dying on TV, you won’t be touched like you are if you see someone dying in front of your eyes. It’s a weird scene. Everyone panicked. They started crying. Yes, I cried.”

By the next day, Tahrir has become another of the many young faces of dead fighters that stare out from the walls of Gaza.

Despite his own success in education his fortune was subverted by a lifetime of conflict.

It is inevitable that in a climate of war some people will choose to fight and die while others will try to pursue their professional dreams, presuming the Israelis allow them to leave Gaza.

But the majority of young people and their families in the area believe their future is tied to education and they all want to learn.

“I am quite optimistic, although the statistics are not very good. We have to remember that children are the product of their environment,” Dr Eyad says.

“If you create a new environment in which children feel secure and they feel that their basic needs are met; in which they are not deprived and they are not living in a desperate environment … then you have a new generation that can give you better hope for the future.”