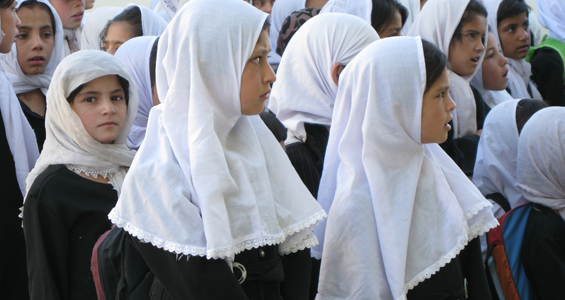 As part of its special programme on edcuation in conflict zones Al Jazeera visited Afghanistan where, despite great steps forward, teachers and schoolchildren are still regularly targeted and killed.

Education has always been a key battleground in the war over values that has characterised more than 30 years of conflict in Afghanistan.

In recent times that battle has attained a new intensity and in the past year more than 140 teachers and students have been killed.

In just one day in Gazny province it was estimated that about 30,000 children were prevented from attending school because of threats against their lives.

“Unfortunately the number of attacks this year has increased dramatically,” Mohammed Hanif Atmar, the education minister, says. “Over the past four months my casualty rate has gone up to 50 per cent of the previous year.”

Hanif says Afghan security forces are doing their best to stem the casualties but admits targeting schools, teachers and schoolchildren has become a central part of tactics adopted by the Taliban and other groups.

In Logar province, just an hour away from the capital Kabul, the Qalai Sayedan School bears the scars of the Taliban’s brutal campaign against education.

Armed guards protect the school grounds, the legacy of a vicious shooting targeting schoolgirls in 2007 that killed two girls as well as injuring several more and a teacher.

Razia, now aged 13, was leaving school with her sister, Shukria, when the gunmen attacked

“When we came out of school the motorcycle riders shot at our teacher. She ran away – and they shot the other students,” she says.

“Then they shot my sister. I picked her up. She tried to stand but then she fell again – and I ran home.”

Razia and Shukria’s father says after his daughter’s murder his “heart was wiped clean” and that he has been reluctant to allow Razia to return to school.

“I have been too afraid – since I saw my daughter bring home her sister in her arms. And every time she sees a motorcycle her heart stop,” he says.

The Afghanistan government sees Islamic religious schools, the madrasas, as a point of concentration in their campaign to counter the influence of al-Qaeda and the Taliban.

The governments in both Kabul and Washington see what they term militant madrasas in Afghanistan, and across the border in Pakistan, as potential training centres for terrorists.

However they are the only schools available in some areas of Afghanistan and as a result the ministry of education is integrating Islamic schools more deeply into the national schooling system.

Consequently there are plans to broaden the madrasa curriculum so that it includes mathematics, science and languages, as well as study of the Quran.

“It’s part of our policy that a new madrasa system with a broad based curriculum will have to be established in this country,” Atmar says. “So that we once again we revive the glory of Islamic education and at the same time say no to the hate madrasas across the border [in Pakistan].”

In Logar province 200 religious teachers have already been urged to take an exam which will qualify them to work under the new state system as well as in specialist madrasas.

But doubts exist over the “value-based education” the minister has in mind with opponents saying there is no place in Afghanistan’s traditional Pashtun way of life for so-called western culture.

“If a woman teaches and she observes the Islamic culture then we respect her,” Haji Abdul Rahman Tawakili, says.

“But if she roles up her sleeves against Islamic Sharia, and if she wears make-up or wears flimsy clothes then that is not Islamic. Some women want equal rights. The rights in western culture.”

Away from the violence in the provinces the direct assaults on education are very rare in the Afghan capital Kabul.

There is no need for guards at the newly-opened Sayed Yusuf Elmi school.

As the first school in its area children head there with a sense of eager anticipation rather than fear.

Only months after opening, the school has around 600 students and is wholeheartedly supported by both parents and the community.

In fact education as a whole across Afghanistan today is largely held up as a success story despite the rising casualties and horrific incidents such as the one in Logar.

There are now nearly six million children in school – far more than there ever were under the Taliban.

However a detailed look at what happens in educational facilities in the country does take some of the sheen off such statistical success.

“Our big problem is not having a proper school building. This building is rented, so we are pressed for space,” Mohammed Hashem Oryakheil, the school principal, says.

“We have up to 55 students in one classroom. And it is hard for teachers and students to concentrate on what is taught.”

Oryakheil says the community have allocated land for a school building but that there is no budget to build one.

Requests to the education ministry for school books have so far been ignored. There are no proper blackboards and basics such as desks and benches have to be borrowed.

There is also no drinking water and no proper sanitation.

“I am so frustrated with the attitude of the government,” Oryakheil says. “They don’t seem to care about what’s happening to us.”

The authorities say they consider education a priority in rebuilding Afghanistan, but that it is one of many competing priorities.

Even with unlimited resources available for education, however, nothing could be achieved without the commitment of teachers.

Torpikai, who teaches English at the new school in Kabul, is one of many examples of a teacher who has kept her resolve under extreme duress.

During the period of Taliban rule in the late nineties she lost her work as a schoolteacher, so she ran secret classes in Quranic studies and English – in her apartment on a bleak, Soviet-built estate on the edge of Kabul.

She only advertised the Quran lessons. But the local Taliban officials discovered her secret and punished her by evicting her from her apartment.

When she left Kabul she defiantly started to teach English again – away from the city.

“When the Taliban came to power the teachers had to stay home. It was chaos. But in the last few years, the education system has become very good,” she says.

“Because the children, whether they live near or far, are coming to school with great passion.”

How Torpikai keeps her own passion for teaching is a remarkable feat.

In the years of civil war that led to Taliban rule, her life had all but been destroyed. She lost her brother in battle. After that her husband. And then – in a rocket attack – a son and a daughter.

“I’ll never forget my daughter’s death. She was an extremely good girl,” she says. “If I could, I would give these four walls to have her back.”

Despite this catalogue of tragedy Torpikai continues to teach the next generation of children with devotion and Adiya, her daughter who survived the rocket attack, has inherited from her mother the same positive attitude to life and to learning.

“My mother doesn’t tell us the story very often because she knows that it will make us sad,” she says.

“I don’t like war.  I want to continue my education so that I can  be something in the future. But I want peace – and I don’t want people to die in the fighting again.”