Qualifiers for Qatar 2022 are set to resume on Thursday with 44 teams still competing for the 17 spots left in the 32-team football World Cup that takes place in November and December.

Who has qualified so far? 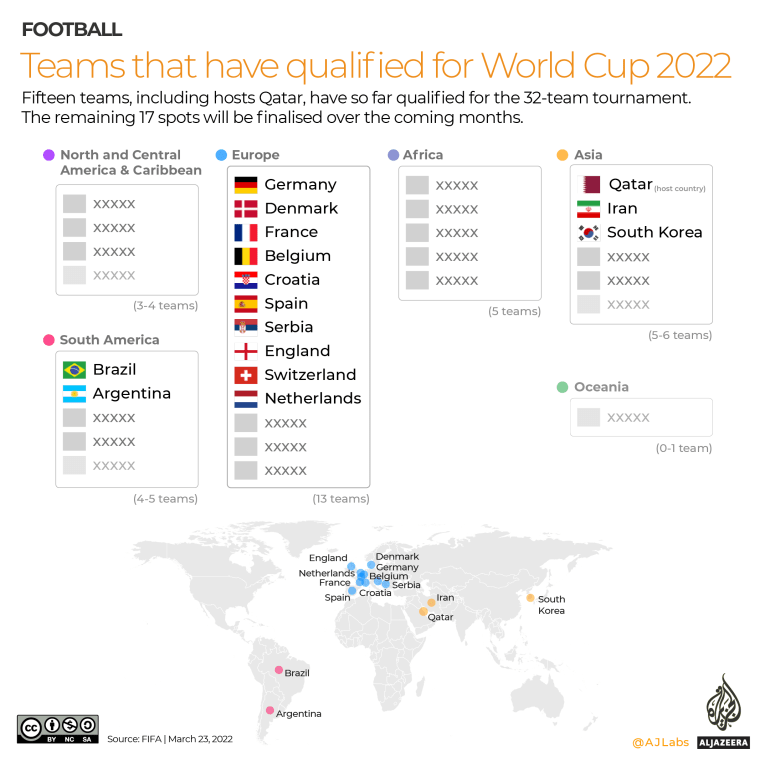 Situation: The 10 group winners have qualified with the the three remaining spots to be determined via the playoffs.

Argentina and Brazil have already qualified while Ecuador need a draw against Paraguay to reach Qatar 2022. For Uruguay, a win over Peru, coupled with Chile failing to win away to Brazil would secure qualification.

North and Central America and the Caribbean

Situation: Top three sides from the eight-team league will qualify directly for the World Cup while the team finishing fourth will go into a playoff with the team that finishes top of the Oceania group.

Canada currently sit at the top of the table followed by USA and Mexico.

Situation: Ten teams have reached the final round in African qualifying with the winners of the two-legged ties, starting from Friday, sealing progress to Qatar 2022.

Situation: The 12 remaining teams in Asia’s qualifying have been divided into two groups. Top two sides from each group will seal progress to Qatar 2022 while the two third-placed teams will face off with the winners facing the fifth-placed side in South American qualifying.

Iran and South Korea have qualified from Group A. In Group B, Saudi Arabia can secure qualification with a win over China on Thursday. Japan and Australia are currently placed second and third in the group.

Situation: Only one side can qualify from Oceania for the World Cup. The winner of the qualifying campaign advances to an intercontinental playoff against the fourth-placed side from the CONCACAF region, which features nations from North and Central America, and the Caribbean.