Hello and welcome to the final of the Africa Cup of Nations.

I’m Faras Ghani and I’ll bring you live updates from the final taking place in Cameroon’s capital Yaounde where we have Oluwashina Okeleji inside Olembe Stadium and Daniel Ekonde among the fans.

This blog is now closed. Click here to read our wrap on the Africa Cup of Nations final.

Thankyou for joining us on that historic journey. Senegal are champions of Africa. And a decisive kick from that man Mane sealed the deal.

Sadio Mané is crowned TotalEnergies Man of the Competition after his over-the-top performance with the Lions of Teranga 🇸🇳#TotalEnergiesAFCON2021 | #AFCON2021 | @Football2Gether pic.twitter.com/8jowC3Bgjr

The wait has finally ended

“What a relief for Aliou Cisse, the most criticised coach in the world, according to Mane, standing right in front of the celebrating Senegalese fans. Clad in the Senegalese colours, the emotional coach is taking in all the adoration and love,” adds Oluwashina from Olembe Stadium, witnessing history himself.

The wait continues for Egypt for an eighth AFCON title

Possession, shots on goal, tackles, nothing matters when the clock goes past the 120th minute.

Egypt were the Pharaohs of extra-time in the knockouts this year and Gabaski held firm in between the posts right from the start.

But Senegal found the net when it mattered. And Salah didn’t even get around to taking his penalty.

Loud noise as Mane, holding the Senegalese flag, is running around the track to celebrate with the fans who witness this moment for the first time in the country’s history.

Sadio Mane! That man! Misses a penalty in the seventh minute, converts a penalty after the 120th.

Senegal are African champions for the first time after losing two finals.

The lists are ready, the players know what’s at stake.

Hold on, here we go.

And we’re going to penalties.

Didn’t seem like we’d still be here when Senegal were awarded a penalty in the fifth minute but here we are.

Nothing separates both sides after 120 minutes 🤝

And the action moves to the other end where Mendy matches Gabaski in making an excellent save!

You’re left wondering where all those shooting boots were in normal time.

Probably the best chance of the last half hour or so. Dieng fires it in and, well, Gabaski blocks it yet again!

Into the final 10. Egypt support gathering pace in the stands as the 11 on the field seem to be picking up a gear.

Getting warmed up for the penalties?

Half-time in extra-time. What will the next 15 bring? A goal or the ref’s whistle to announce penalty kicks?

Tired legs, tired minds, tired fingers (mine). Something has to give.

Btw, no extra-time winner in an AFCON final since 1965.

In the stands, Senegal fans continue to sing and dance, hoping for a late goal. But Egypt fans are very quiet, happy to wait for penalties.

Egypt’s keeper keeps the tie level after flying to the left corner to keep Dieng’s attempt out.

Gabaski again! That man. Seemed a routine save but it’s nothing like that in extra-time in a final.

Back underway for another 30.

“One Senegal supporter, Haller Delan, just told me ‘We believe God will help us’,” as Senegal and Egypt head into extra 30 minutes. I understand many here are supporting Senegal partly because Egypt eliminated Cameroon in the semis,” Daniel chips in with a bite-sized input as we all get settled into our chairs again.

A total of seven shots on target (Senegal 5, Egypt 2) but none made it past the keepers. Senegal missed a penalty and fired several free-kicks over the bar.

Egypt will be happy with what’s going on. Their fourth consecutive extra-time appearance at AFCON this year. And they won the last three to seal their spot in the final.

With three out of three extra-time/penalties wins, Egypt supporters are loving this.

Spectacular attempt by Dieng to put Senegal ahead but it flies way, way, way over the goal (again).

Into the final five.

Senegal has been very wasteful‼️ 🤨 #AFCON2021

The answer is no. The free-kick sails over the goal and now Egypt’s hero of the final so far, Gabanski, is down.

Senegal have yet another free-kick just outside the box.

Mane’s tripped by Fathy (who is on a yellow). Will Senegal make this count?

Twenty minutes left. Will Egypt go to yet another extra-time at this year’s AFCON (all three of their knockouts have gone to ET)?

Senegal still doing well on the possession chart (52%) but they need a goal from somewhere to become champions of Africa for the first time.

“As the frustrating sound of Senegalese fans fade away, the Egyptian fans are coming alive. They’ve travelled in large numbers to Yaounde for this game… now we can finally hear the drums from across the Cairo section of the stadium,” reports Oluwashina from Olembe Stadium.

Egypt’s goalkeeper should be named as the man of the match.

Besides luck, he is the only reason Egypt hasn’t conceded a goal so far.

Another free-kick to Senegal just outside the box.

No luck (or a goal) again as Egypt clear their lines just as quickly.

🟨 Diallo gets a yellow for a foul on Salah just moments after Gabanski makes another wonderful save denying Diedhiou after a cross from, you guessed it, Sarr.

Our other man Daniel has been hanging out with some football fans in the capital Yaounde.

“In this drinking spot, I have spoken to many fans who are rooting for Senegal. Despite Mane missing a penalty in the first half, Vincent, a football fan, believes the Senegalese will score in the final.. ‘Mane is a great player, let’s give him the second 45 minutes’.”

Free-kick to Senegal just outside the box.

And it’s sailed way over the goal.

Right then, here’s to the next 45 minutes.

“Senegal fans to my right are nervous. Intense half-time discussion. A lady clad in the colours of the West African nation says in French ‘I am worried about the misses but I know Sadio can make up for the penalty miss in the second half’.” Our man Oluwashina is keeping his eyes on the pitch and ears on Senegalese fans.

So no early whistles (yet) in the AFCON final. It’s half-time and Mane’s missed penalty very, very early in the game will be the talking point during those half-time discussions all of you will be having. It could also be the ref offering his whistle to Salah.

Three shots on target for Senegal, two for Egypt.

As half-time approaches, it’s still Senegal that look the likelier of the two to have the ball in the back of the net… despite that Salah effort moments earlier.

🟨 Fathi goes in the books. Salah’s not happy (despite being offered the whistle by the ref) and something tells me if the match stays like this for long, things won’t change for him.

Oluwashina, the Africa football expert at the Olembe Stadium, chips in with this:

“The half-hour mark: Senegal creating all the chances. Fit-again Watford man Ismaila Sarr probing on the right. His dangerous crosses across goal not met by any Teranga Lion.”

Salah has a first shot on target.. in the 28th minute. Egypt has had 43% of possession and need him to be more involved.

Don’t forget, the Liverpool man (one of them) has been involved in three of Egypt’s four goals at this tournament.

Senegal on top, Egypt hanging on.

Ismaila Sarr is making his presence felt on the pitch. But are expectations taking a toll on Mane?

Senegal with the upper hand in the final so far (on possession stats). But Gabaski has kept Egypt in the game with that penalty save.

Mane got nervous and went for power. Senegal are playing well though.
But that Egyptian keeper is solid.
#AFCON2021

Mane misses the penalty. Great save by Gabaski.

A moment of silence for the eight who lost their lives last month in a crush outside this very stadium.

Senegal get the AFCON final underway from left to right.

The closing ceremony is out of the way, President Biya is in the house, Senegal is winning the Twitter poll and the players are on the pitch for the national anthems.

Less than 10 minutes to go.

Senegal to win, then? That’s what you lot said in our Twitter poll: 👇

A certain Mo Salah, who has been involved in three of the four goals Egypt have scored in this tournament, needs to get his followers voting!

Our man Oluwashina at the ground says “Senegal’s goal-keeper Mendy is out for his warm-up and he’s got the fans out of their seats. Clearly the home fans are all for Senegal. After Egypt knocked Cameroon out in the semis, it’s clear who they are supporting today.”

Reminder: Both these sides lost the last time they were in an AFCON final.

Senegal lost to Algeria in 2019 while Egypt were beaten by Cameroon in 2017. 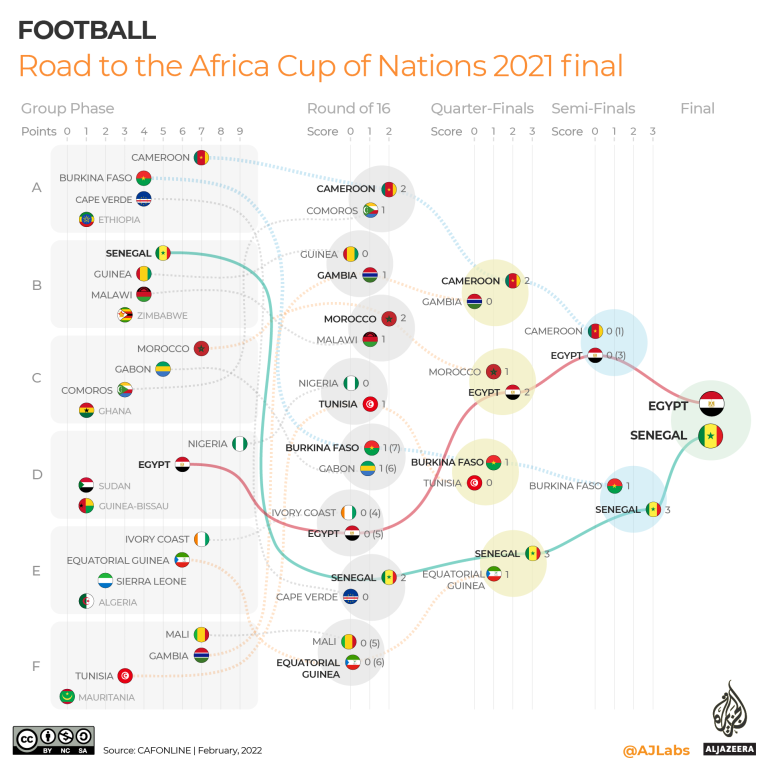 Right then, one hour to go until kick-off. The closing ceremony is underway at Olembe Stadium.

Time to predict tonight’s winners (if you haven’t done so yet). Go to our Twitter page and vote for who you think will win.

Egypt plays attractive football but I give this one to Mane and Co.

The Lions of Teranga will maul stubborn Pharaohs.

Oluwashina chips in with this: “Stadium erupts into a wild applause as Cameroon’s President Paul Biya arrives with his wife.”

Imagine the scenes if the home side was still in the tournament.

Here are the past AFCON winners. Egypt, as you can see, are called Pharaohs for a reason. 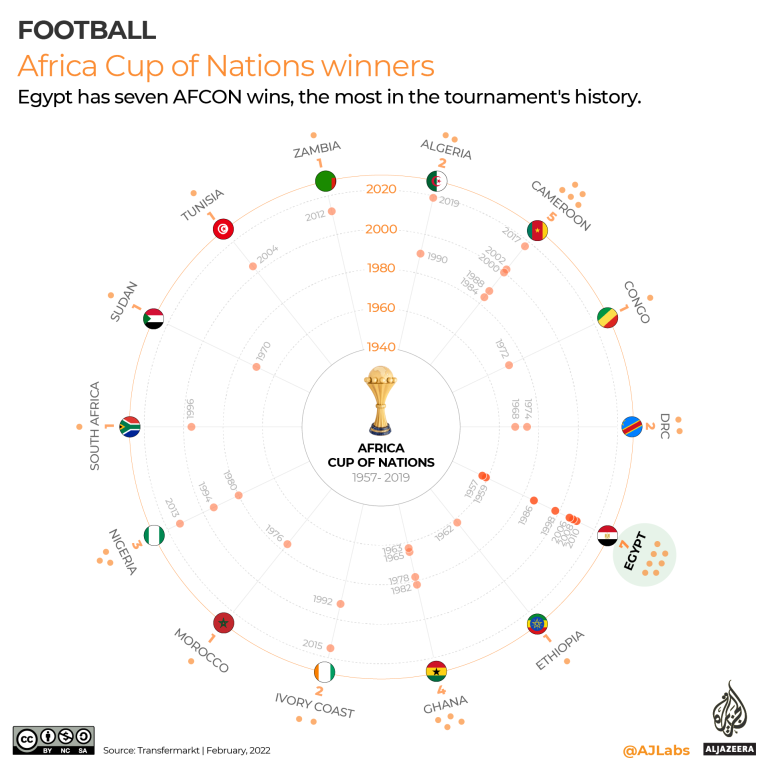 Oluwashina is seated comfortably inside Olembe Stadium and is, umm, enjoying the view.

“Police, firefighters, naval and airforce officers, the army, Gendarmeries, national guard, and others… they’ve been standing there for three hours,” he says.

Mind you, he had to walk four miles to get to the stadium.

“Closure of roads six hours before kick-off with police lining up the streets,” he adds.

Still more than 90 minutes until kick-off.

Here’s Daniel among some Senegalese supporters who have gathered outside the embassy in Bastos, Yaounde, as they wait for buses to take them to the stadium.

Seems we will have a decent Senegalese turnout at Olembe Stadium.

While we wait for some action on the field, here is some worthy AFCON reading material for you to dive into:

Right, two hours until kick-off. Who do you think will win? Senegal? Egypt?

Cast your votes now and win bragging rights if nothing else. 👇

The #AFCON2021 final will see one of football’s most exciting attacking duos face off against each other as Egypt’s Mo Salah goes against Senegal’s Sadio Mane.

Who are you supporting? 👇

Egypt and Senegal have met on 12 occasions with the Pharaohs winning six of them, the last victory coming nearly 16 years ago to the day. 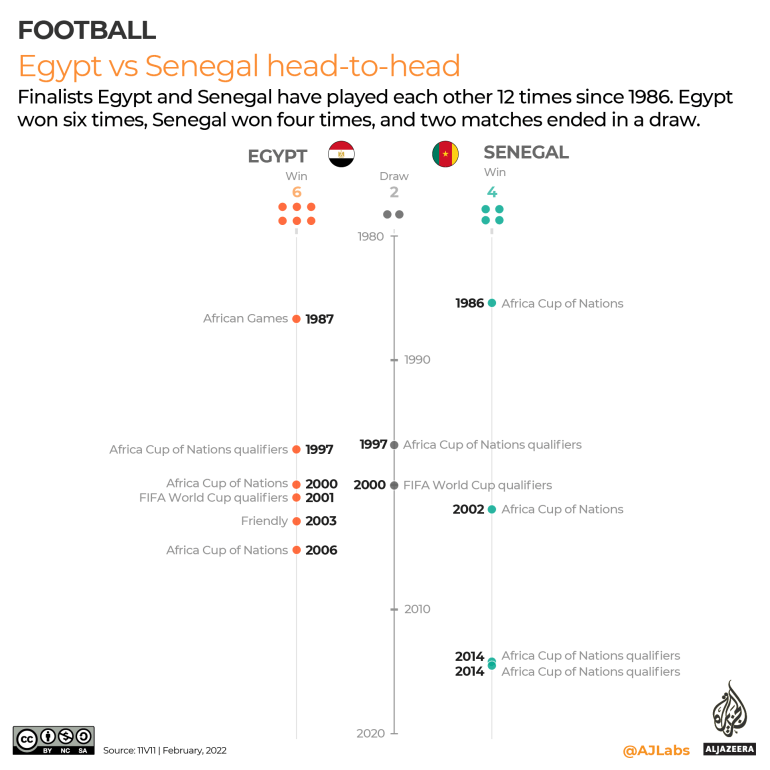 Route to the final

Neither side came out all guns blazing at the start of the tournament.

Egypt managed just two goals in their three group matches, edging out Guinea-Bissau and Sudan with 1-0 scorelines after losing their tournament opener 1-0 to Nigeria.

Senegal had two stalemates against Guinea and Malawi that followed a 1-0 win over Zimbabwe in the opener.

But both sides picked up pace from there on.

What you need to know about the AFCON final

The final will also see one of world football’s most exciting attacking duos facing off against each other as Mohamed Salah leads Egypt against a Senegal side spearheaded by Sadio Mane.

The match is being played at Yaounde’s Olembe Stadium, where eight people were killed in a crush on January 25 – a tragedy that has overshadowed the tournament in Cameroon.

Here’s what you need to know about the final.