The Atlas Lions will face the Red Devils on Sunday at Al Thumama Stadium in Doha in what is a key group-stage clash.

In the build-up to the tournament, Belgium were the clear favourites in this game, but their tepid performance against Canada on Wednesday will have given Moroccan fans real hope that their team could cause a World Cup upset.

Belgium struggled to contain a dynamic, well-organised Canadian team, which deserved at least a point from the match but ultimately let themselves down and finished with a 1-0 loss.

Despite being ranked second in the world by FIFA, the Red Devils have been in erratic form lately, racking up a huge 6-1 win against Poland in the Nations League but losing 4-1 to the Netherlands in the following fixture.

How shiny is Belgium’s ‘golden generation’?

There are suggestions that this is the last hurrah for Belgium’s golden generation. The age of players such as Real Madrid’s Eden Hazard is beginning to show on the pitch during action for club and country.

This game could present a well-drilled, passionate Moroccan team with a real opportunity to beat an increasingly inconsistent Belgian side.

The Atlas Lions’ first match against Croatia was a cagey affair that ended in a nil-nil draw. However, there were flashes of brilliance from Chelsea’s Hakim Ziyech and PSG’s Achraf Hakimi. The latter is a doubt for Sunday’s match after picking up a thigh injury against Croatia.

A number of players on the Moroccan squad were born in Belgium, including Selim Amallah, who is likely to start on the left wing.

Romelu Lukaku is expected to start on the bench for Belgium after recovering from a thigh injury that has limited his appearances for Inter Milan this season. Michy Batshuayi will be tasked with leading the line for the Red Devils, having scored the winner against Canada.

Bayern Munich’s Noussair Mazraoui joins Hakimi on the injury list for Morocco after being stretchered off against Croatia. 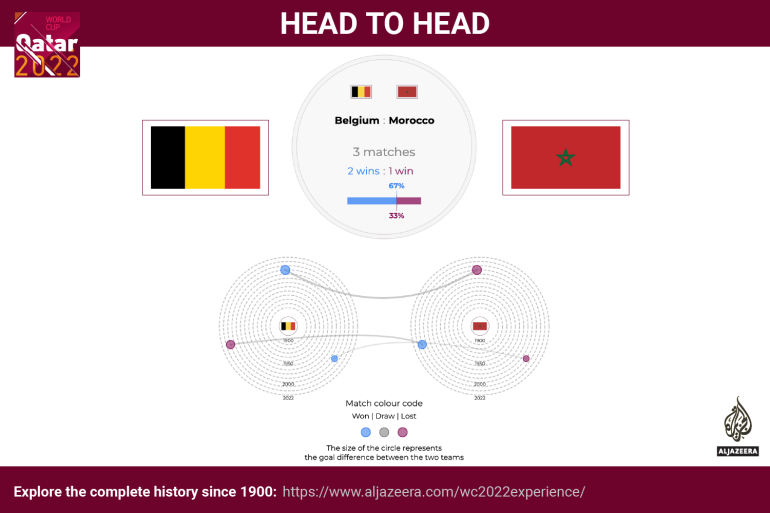 Belgium beat Morocco 1-0 at the 1994 World Cup, the only time they’ve ever met at the tournament.

Canada and Croatia, the two other teams in Group F, will play against each other in Sunday’s subsequent fixture.