Ravikiran Siddi is just like any other runner. He wants to run faster.

His short-term goal this year is to clock 10.5 seconds, Ravikiran told Al Jazeera. In the long term, he hopes to win medals at international events.

“If I succeed, the name of Siddis will shine,” he said, referring to the African-origin community he belongs to.

The community, found in pockets of India, is descended from various East African tribal groups, including the Bantu.

According to some accounts, the Siddis (thought to be a variation of the term Sayyidi, an honorific in certain African groups) were brought as slaves by Arab traders around the seventh and eighth centuries, a practice that was continued by Portuguese and British.

Others arrived as merchants, sailors, and soldiers.

Some rose to positions of power, like Malik Ambar, who became a military leader in Deccan India in the 16th century. Last year, Shantaram Siddi became the first from the community to be nominated as a member of state legislative council in the southern state of Karnataka.

The Siddis are often seen as outsiders because of their curly hair and features despite having lived in India for generations and assimilating into local cultures.

They are known to face various forms of discrimination. According to news reports, Siddis have been called “black bears” and been told that they are “guests” in India and should stay within their boundaries.

Ravikiran said while he has not received insults from anyone, he has noticed that when he travels across India for competitions, people look at him like he is a foreigner, their eyes lingering on his hair and skin tone.

One Siddi athlete told Al Jazeera that there have been instances of people touching other Siddi athletes’ hair out of curiosity.

“We strongly believe sports can change the perception of not just Siddis, but any community that excels in the field,” Chiniwar told Al Jazeera.

Set up in 2016, BoS has worked with children from tribal communities to help foster talent and improve lives.

So far, BoS says it has introduced football and athletics into the lives of more than 2,000 tribal children, including 250 to 300 Siddis, from states such as Karnataka, Madhya Pradesh and Odisha.

Inspired by the likes of Usain Bolt, Ravikiran jumped at the opportunity when BoS coaches visited his village to conduct trials, becoming one of the earliest recruits in 2017.

Now, he trains at BoS facilities in Karnataka, balancing his sporting ambition with online classes for his Bachelor of Arts degree.

Chiniwar came up with the idea for BoS when he turned his attention to people who did not get chances to move their love of sports from a hobby to a career.

He also believed in the power of sports to bring about change after seeing African American athletes like boxer Mohammed Ali and sprinters Tommie Smith and John Carlos use the platform to turn the spotlight on their community.

He started working with tribal groups like the Gonds, Baigas and Siddis that often live away from mainstream groups in India and do not get the same breaks.

“No matter where they come from, what their background is, they should get the same opportunities as everybody else,” said Chiniwar.

BoS was set up in Mundgod, a town in the northern Karnataka region. There were sporting facilities, administrative support and when surveyed, the regional Siddi population, numbering about 40,000, showed interest in having a sports organisation in the area.

Children aged 14 and above as well as coaching staff, including a nutritionist, biomechanist, and track coaches, live on-site with the hostel doubling up as a dormitory, gym, school and a food hall.

Younger ones are enrolled in a local residential school that partners with BoS.

Once the team feels that a student is ready in terms of discipline, attitude and talent they are given an “athlete contract” before moving to the hostel.

The contract states that BoS will support the child until undergrad or employment, Chiniwar explained.

Siddis usually make up about 50 to 60 percent of BoS’s intake.

The idea of providing athletes with life skills is integral to its mission. The organisation says it helps develop mental strength, healthy habits and personal skills.

“I was very shy but now I’m more confident when I talk to people,” Ravikiran said.

“Initially the idea was to engage children with sports, but now we have a target of getting to the podium in the 2028 Olympics in the 100m, 200m and 400m events,” Chiniwar said.

This is not the first time a sports programme and tribal communities have crossed paths in India.

In 1985-86, the Indian government launched the Special Area Games (SAG) scheme to find promising athletes from remote regions across the country.

The programme’s aim, according to the Sports Authority of India (SAI), was to scout for “natural talent for modern competitive sports and games from inaccessible tribal, rural and coastal areas of the country” and nurture them “scientifically for achieving excellence in sports”.

People from across India, including Siddis, were chosen for disciplines ranging from archery to athletics and rowing.

“It does seem as though the state felt like the bodies of Siddis who work on the land, who are close to the earth and particularly, the people of African descent would be generally inclined towards athleticism,” Beheroze Shroff, a lecturer at the University of California, Irvine who has spent years studying India’s Siddi communities, told Al Jazeera.

“To an extent, this can be seen as a stereotype of Africans as athletes, that’s there even in the United States. That may possibly have been one motivation. The other more important one was that India needs to be competing at international levels and Siddis have the potential to compete in that arena.”

Athletes from the programme performed well, garnering state and national records and even participating in international events.

Archer Limba Ram represented India at the Olympics between 1988 and 1996.

Juje Jackie Siddi was part of the second batch of SAG trainees, chosen in 1989 for the athletics programme.

Things were going well until the programme was abruptly shuttered in 1993, Juje said, adding that the athletes received letters saying they were removed for not performing up to the mark.

BVP Rao, an officer of the Indian Administrative Services, who was director of the SAG scheme when it was launched, called the termination “a very unprofessional decision”.

He said he had moved to another assignment when the programme ended and was unaware of the reason behind the decision.

Rao said there were attempts to launch subsequent versions of the programme but there was no “full-hearted attempt ever made after [1993]”.

Following the termination, Juje said the athletes were left without support. Some went back to their villages, some continued in sports like judo and weightlifting, and others, like Juje, hustled to find jobs.

Athletes can get government jobs in India under a sports quota which provides a steady income, pension and sometimes even the chance to continue training and playing semi-professionally.

That is how Juje found work first with the Bengaluru city police force and later with the government-run Employee Provident Fund Organization (EPFO) in Mumbai, where he currently works.

Other SAG athletes like Kamala Siddi and Louis Vincent Siddi got jobs with regional railways.

“If there were no sports, I wouldn’t have this job or be able to support my family, I’d still be living in my village,” Juje said. “Sports isn’t only about winning medals. It is important for social change, too.”

For Chiniwar, what happened with the SAG scheme is a cautionary tale.

“When the programme stopped, everything went back to square one. We want to do something that can be sustained,” he said.

“If BoS leaves Mundgod in 10 years, there should be enough knowledge for the training to continue. That can only happen if you build a system in the same vicinity.”

That system that Chiniwar talked about involves training coaches and having support staff. Nineteen-year-old Shweta Siddi is part of that system.

Though she joined BoS as a 400-metre runner, Shweta is now learning about sports nutrition as the kitchen-in-charge at the hostel and is working towards joining the coaching team.

“I’m happy because I get to continue my education, earn a salary and learn how to take on responsibilities which will help me grow,” Shweta said.

The focus on ensuring athletes complete their education has helped win parental support.

“The way Shweta has cultivated herself in sports, education and physically, she can face all challenges in her future,” her mother Shanti said.

Meanwhile, Ravikiran’s father Francis sees great prospects for him too.

“If he does well, his life could be great: respect, fame, job and a stable life. And he could even help someone else like him,” he said.

Doing something for the community is part of Ravikiran’s goals.

“The kids see us as role models,” he said before repeating that his success will help the Siddi community gain recognition.

For now, a gold medal for India in the 100-metre remains his priority. 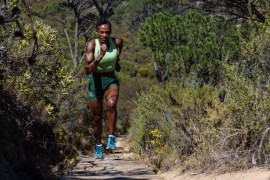 In 2016, ultramarathon runner Mfunzi was raped and nearly died. Now, she’s using her energy to help other rape survivors 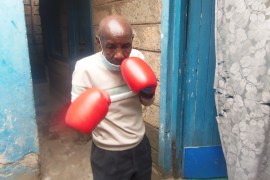 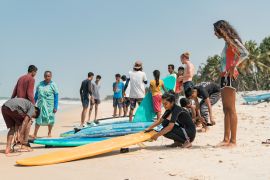 How a surfing revolution is riding the wave in India

Despite obstacles, surfing is seeking a bigger base in India.