Gyasi Zardes scored in the 86th minute as the United States beat Qatar 1-0 to reach the final of the CONCACAF Gold Cup where they will take on Mexico who beat Canada in the other semi-final.

Zardes replaced Daryl Dike in the 63rd minute and combined with two other second-half subs, Nicholas Gioacchini and Eryk Williamson, to score his 14th international goal and second of the tournament on Thursday.

The 20th-ranked US matched its record with 13 consecutive home wins and advanced to Sunday night’s final in Las Vegas against defending champions Mexico, which beat Canada 2-1 in Houston.

CONCACAF filled out the field for the Gold Cup, the championship of North and Central America and the Caribbean, with the 2022 World Cup hosts Qatar as invited guests.

Qatar had a chance to go ahead in the 61st minute but Hassan al-Haydos sent a penalty kick over the crossbar following a foul by James Sands.

Mexico gets a free timeout because of their homophobic fans, and then score in the 9th minute of stoppage time after only seven were posted. Heck of a job there, #Concacaf. #GoldCup

Meanwhile, Hector Herrera scored in the ninth minute of second-half stoppage time to give Mexico a dramatic win over Canada in a match briefly stopped in the second half due to homophobic chants.

Orbelin Pineda converted a penalty kick in the second minute of first-half stoppage time to put Mexico ahead before Tajon Buchanan equalised in the 57th minute, the first goal conceded by Mexico in the tournament.

The referee halted play in the 86th minute after Mexican fans were heard shouting a homophobic slur.

In the ninth minute of injury time, Herrera took a pass from Rodolfo Pizarro and slotted a shot from 16 yards to seal his side’s progress. 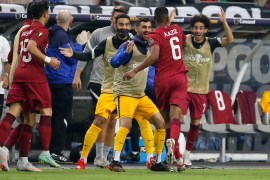 Ali scores brace for Qatar while holders Mexico thrash Honduras to book their place in the last-four. 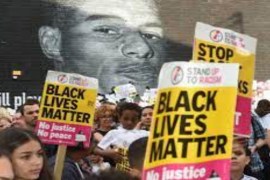 How to stop racism in football?