Time to wrap it up

Congratulation to Villarreal (and both goal-keepers) on an amazing performance.

The final report on the 2021 UEFA Europa League final is here. Do give it a read.

And thanks for joining us on this epic journey.

A night of sheer joy for Villarreal

First major trophy and what an achievement it was.

After what seemed like an endless wait, and not just the penalty kicks, Villarreal finally win their first major trophy!

#UELFinal | Sorry, but we can’t say much. We are too busy crying tears of joy. 💛 pic.twitter.com/osUjk8kHJx

End of extra-time and both teams still tied 1-1.

The 2021 UEFA Europa League final will be decided from the spot-kick.

Villarreal OR Manchester United for the 🏆?#UELfinal

Cavani is booked, McTominay gets a knock, VAR checks for a Villarreal penalty. It’s all happening… except a goal.

Into the final 15 minutes.

First half of extra-time comes to a close… and nothing separating the two sides.

United holding back in their half. Villarreal, with five substitutions already, are the ones pressing for a winner.

Time for Solskjaer to make a change?

And he does. Fred on for Greenwood. Hmm..

United had more of the possession (64 percent), more shots on target (two) and more shots off target (seven) but no separating the two sides in terms of goals in normal time.

It will be another 30 minutes of running around to find a winner before we see a shootout.

#UEL #UELfinal #VILMUN are Man Utd gonna use any subs, been a long season looking tired

90 minutes are up. No winners as things stand.

United yet to make a substitution.

And we see a bit of Harry Maguire on the sidelines… with some words of encouragement for the workhorse Luke Shaw.

With five substitutes allowed (and a sixth if the final goes into extra time), Villarreal bring on fresh legs.

And it’s a corner for Villarreal.

Crosses coming in, a penalty appeal and Villarreal are on the backfoot (but on equal footing when it comes to goals scored).

Villarreal 240-440 Manchester United… those are just passes, not goals.

Manchester United equalise through – yes, you guessed it right – Cavani.

Frustration for the fans

@paulpogba needs to come through in this game big time! Influence this match, it’s there for the taking! Earn your keep! #UELfinal #MUFC

More of the same for Villarreal for the next 45 minutes and they will lift their first European trophy.

United, meanwhile, need to find a way through. Even if it comes in injury time.

No changes for either side.

What that Moreno goal meant

💛 Gerard Moreno is the first player to score 30+ goals for Villarreal in a single season in all competitions since Giuseppe Rossi in 2010/11 ⚽️#UELfinal https://t.co/qkNRHbNKWy pic.twitter.com/o4Fw5SC4dM

Ref blows the whistle for a 15-minute breather. Villarreal halfway there… unless United score, of course.

Sixty-eight percent possession for United but Villarreal lead in their first European final.

Manchester United are still trailing… but their fans aren’t giving up. Wonder why?

Against the run of play, Villarreal open the scoring through Moreno… the Spanish side’s first shot on target.

Manchester United dominate possession in the opening 30 minutes but Villarreal have the all-important numerical advantage.

The ‘away’ side has had almost 60 percent of possession in the opening 20 minutes of the game.

A reminder that Villarreal have, in fact, scored more goals than United in the tournament this season. They have also played six more matches than United.

🤔 Who’s on top so far in the Europa League final?#UELfinal pic.twitter.com/GKRLzMoie3

First sight of the stretcher

Thankfully, it’s not needed. Pogba accidentally knees Foyth in the head but the Villarreal player manages to get up after receiving treatment.

Rashford crosses to McTominay who shoots just side. It’s been mostly United in the first seven minutes of the final.

It’s kick-off. Manchester United get us started in red.

The 2021 Europa League final is underway.

All you need to know about the final

Just over 10 minutes to kick-off.

For everything else – fans, VAR, designated home team – check out our explainer on the 2021 UEFA Europa League final here.

Solskjaer: We have to trust ourselves

“We just have to trust ourselves. This is a reward for all the hard work they’ve done in the last two years. We’ve been getting closer to a final. I want them to play with confidence, play with courage and be the best version of themselves.”

Fans flocking into Poland’s historic city of Gdansk for the Europa League final said their enthusiasm for the game had triumphed over their fears about COVID-19.

English and Spanish supporters said they were excited to be able to witness the first major European final in nearly two years to have fans in attendance.

“It’s been emotional because of what it means to play the first final in the history of Villarreal, and also because of the situation we are in, the pandemic, after a year of not having travelled,” Andrea Manrique told Reuters news agency.

“I think that enthusiasm has won out a little over fear,” she added, wearing a yellow scarf in support of her team.

There is still time to cast your vote… who will win the 2021 Europa League final?

Head over to our Twitter page and vote. There are two options: Manchester United or like @Paddyfresh3 puts it, “the club that have not won it before”.

Let the club that have not won it before win it

Here’s how the Yellows will line up in Gdansk for the historic game.

David de Gea indeed starts in goal. His last appearance in a Manchester United shirt? And Harry Maguire on the bench… wonder what role he will play in the middle.

Presenting our final starting line-up of the season ⬇#MUFC | #UELfinal

Kick-off just over 90 minutes away.

Villarreal fans out in numbers in the Polish city of Gdansk… and making some noise (despite what our Twitter followers have predicted).

Are you in Gdansk? Tweet us, tell us how much noise you’re making.

Who are you rooting for?

Will Villarreal win their first major trophy? Or will Manchester United lift the Europa League for the first time since 2016-17?

Head over to our Twitter page for the poll… seems pretty one-sided right now.

Who will win the 2021 Europa League final? #UELfinal

A group of Manchester United fans visiting Gdansk were attacked on a restaurant terrace late on Tuesday.

Local mayor Aleksandra Dulkiewicz condemned the attack on a group of between 20 and 30 fans, saying in a statement posted on Facebook that Gdansk was an open city with no place for violence.

All you need to know about the final

What time is kick-off in your region? Are fans allowed? Will there be VAR (and VAR-related drama)? And who is the designated home team in the final.

Here is all you need to know about the Europa League final.

🌍 Where in the world are you watching the Europa League final? 🙌#UELfinal pic.twitter.com/Ns4WRzlCoQ

Manchester United will aim for a first title in four years.

United’s last trophy came in the 2016-17 Europa League under Jose Mourinho when it became just the fifth club to win all three major UEFA competitions.

But up against them are Villarreal, who lost four previous European semi-finals before dumping out Arsenal in the last-four and who are unbeaten in the tournament this season. 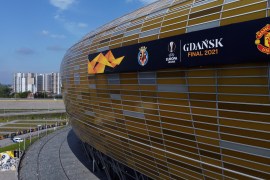 Spain’s Villarreal take on England’s Manchester United in the final of the Europa League. 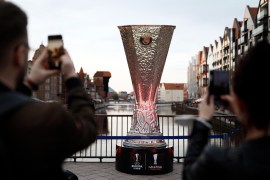 Europa League final: What you need to know

Villarreal will take on Manchester United in the final of the Europa League on Wednesday. 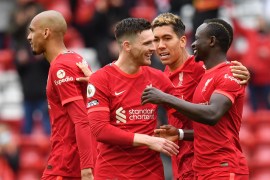 Mane scores brace for Liverpool while Chelsea finish in top-four despite loss at Aston Villa.