Football is the world’s most popular sport, with at least 3.5 billion fans around the globe.

A decision earlier this month by 12 elite European clubs to join a new league, the Super League, caused shockwaves around the world.

Each club was promised a share of the 3.5 billion euros ($4.2bn) grant provided by investment bank JP Morgan.

European football’s governing body UEFA and FIFA, football’s world governing body, threatened to ban the clubs as well as the players and issue them fines. Following furious reactions from fans, players, managers and governments, all six English clubs, Spanish club Atletico Madrid and Italian clubs Inter Milan and AC Milan pulled out of the competition, leaving the future of the Super League in doubt.

Played almost everywhere, football is the world’s most popular sport. FIFA estimates that nearly 3.5 billion people, representing almost half the planet, watched the 2018 World Cup championship in Russia – the most in any single sporting event.

Below is a map showing the most popular sport per country. Popularity is measured by combining several factors, including viewership, number of players, public interest and local media coverage. 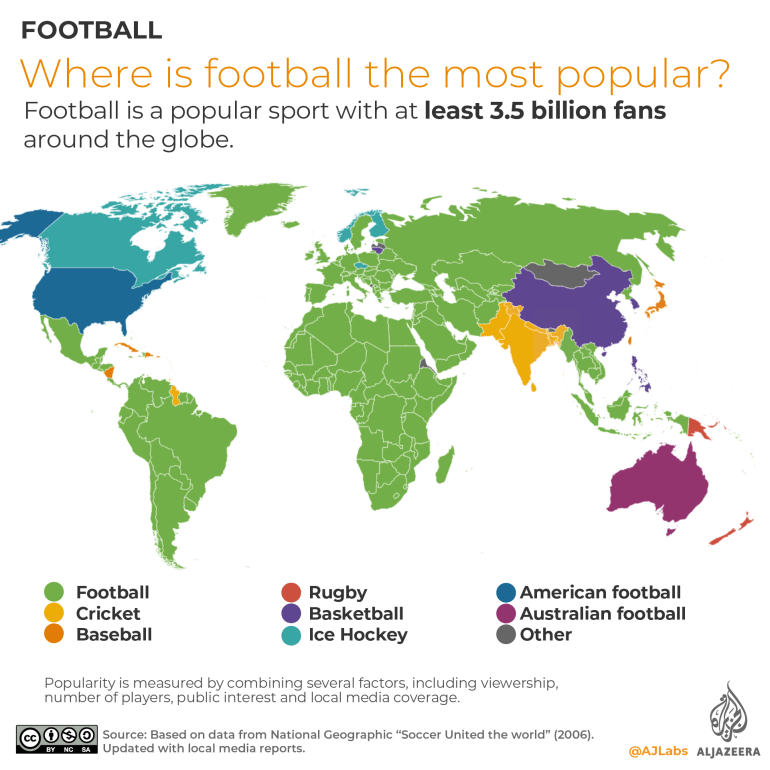 Football leagues around the world

FIFA, the 116-year-old sports federation, is headquartered in Zurich, Switzerland, and manages six continental confederations that include national and club leagues.

The top-tier tournament in each continent is known as the Champions League or Copa Libertadores in South America. Top teams from each of their respective sub-leagues compete once a year for their continent’s prestigious trophy. Europe’s UEFA Champions League pays the highest football club tournament prize at €19m ($23m). The most valuable clubs

According to data from Forbes’ soccer valuation list, all 20 of the world’s most valuable club teams are based in Europe. The 20 richest teams are worth more than $45bn. Spanish club rivals Barcelona and Real Madrid are estimated to be worth at least $4.75bn each. All 12 teams that signed to join the Super League are among the 20 richest teams worldwide. The most expensive players

Among the top 20 most valuable players, 15 are in teams that joined the Super League. Currently, the world’s most expensive club player is Kylian Mbappe who plays for French club Paris Saint Germain. The 22-year-old centre-forward is worth $176m according to football website Transfermarkt.