UEFA President Aleksander Ceferin has warned his FIFA counterpart Gianni Infantino against pushing ahead with a vote on the plan for a biennial World Cup, saying there would be “terrible consequences” to such a move.

FIFA’s ruling council agreed on Wednesday to hold a global summit of all 211 member associations on December 20 to discuss the proposals for a World Cup to be held every two years rather than every four years.

However, Infantino did not commit to hold a binding vote on the plans.

FIFA will now wait for the results of a feasibility study and also an economic analysis of the financial impact of the extra World Cup, which are expected to be delivered before the summit.

“We will continue with the objective of reaching a consensus with solutions that work for everyone’s benefit. By hosting a global summit later this year, we will now have the opportunity to present one plan and to provide feedback to all our FIFA member associations,” Infantino on Wednesday.

Infantino had taken part in a conference call on Tuesday with UEFA’s 55 national federations and the proposals received widespread criticism and rejection.

Reuters has heard a recording of the meeting in which Ceferin urged Infantino to pull back from taking the issue to a vote in December.

“I am seriously asking you and FIFA not to push for a vote, because that could have terrible consequences for football in general,” said the UEFA president.

“I don’t think it would be wise to go for a vote on a matter like that. Not just because there will be severe consequences that we will have to take but also because the stakeholders like clubs and leagues don’t have a vote and this idea is detrimental to their existence,” he added.

A report commissioned by UEFA, and presented in Tuesday’s meeting, estimated a shortfall of between 2.5 and 3 billion euros ($2.9bn to 3.5bn) across four years for European federations if FIFA were to adopt its plan to switch to a biennial World Cup, AFP has learned.

But Infantino pitched the reshaping of world football as being necessary to safeguard the future of the sport.

“I believe as well that the enemy of football is not the World Cup or is not FIFA but it is other activities that young boys and young girls are running after today,” Infantino said on Tuesday.

“And we need to see how jointly and together we can bring them back to be interested in football.”

Infantino did not specify what those “other activities” were.

Officials from the Italian, Romanian, German, Portuguese and other federations made clear to Infantino on Tuesday their view that the changes would be damaging to the game and also criticised the way the consultation process has been handled.

Razvan Burleanu, president of the Romanian Football Federation, reminded Infantino that his body was one of those European associations who had supported him in his election to FIFA president.

“We trusted you to create an organisation that transcends divisions and creates unity,” he said before arguing that a December vote would cause division.

“[It would be] a vote which will face Europe against Africa and the Caribbean Football Union,” he said.

Tiago Craveiro, CEO of the Portuguese Football Federation, said a better idea would be for an additional World Cup featuring only teams that had not qualified for the previous edition.

“Do you keep [your] word that FIFA will only go ahead with this project if it doesn’t harm anyone?” he asked Infantino.

Infantino said that idea would be looked into.

“We need to try to find a common ground. We will not go ahead with any proposal if anyone is to be harmed … I welcome Tiago’s idea … this is something that the technical people will study and certainly something we have to look into,” the Swiss-Italian said.

“My role as FIFA president is to facilitate dialogue, to facilitate the proposals, I am not the one deciding, the ones deciding will be you.”

Infantino added that “the door is open to present other proposals” regarding the future of the game and competitions. 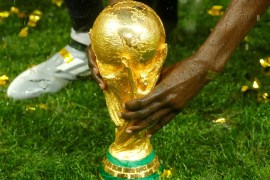 Who benefits from plans for a biennial football World Cup?

FIFA wants to change the frequency of the World Cup but not everyone is convinced. 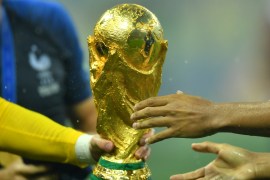 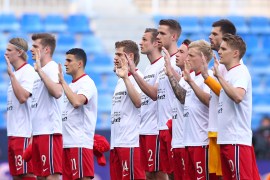 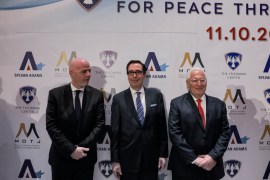 Infantino became the first head of FIFA to visit Israel and suggest a joint Israel-Arab bid for the 2030 World Cup.