Bahrain-born footballer Hakeem al-Araibi, who was released from a Thai prison last month after an international outcry, has officially become an Australian citizen.

He became an Australian citizen on Tuesday along with 200 other people at a ceremony in Melbourne after passing his citizenship test with a 100 percent score, Australian media reported.

The 25-year-old, who fled Bahrain in 2014 and received refugee status in Australia, was arrested in November 2018 at Bangkok’s Suvarnabhumi Airport while on a honeymoon trip, following an Interpol notice issued at the Gulf state’s request.

The former national team player was convicted in Bahrain in absentia in 2014 on charges of vandalising a police station in 2012 and was sentenced to 10 years in jail.

He has always denied the allegation and said in the past that he was tortured in his home country for criticising a relative of the royal family.

Australian Prime Minister Scott Morrison, who was present at the ceremony, congratulated al-Araibi, saying “this is a tremendous day that we welcome you, absolutely, into the Australian family”.

Al-Araibi said he wanted to return to playing for Melbourne’s Pascoe Vale football club and even harboured ambitions to play for the Socceroos, Australia’s national team.

“I want to focus on soccer for this country,” he said.

Al-Araibi said he was humbled by the support from Australians in the campaign which led to his return, and thanked former Australian captain Craig Foster and Foreign Minister Marise Payne, who led efforts for his release.

Foster said he hoped to see al-Araibi play for Australia one day. He said it was “surreal” to think that “not too long ago, he was in prison fatigues sitting behind a Perspex window”.

Today we welcomed another refugee into the Australian family (who happens to be a famous one now). May we learn from the experience as a nation, treat every asylum seeker as supportively, with corresponding compassion as Hakeem. All deserve equal dignity, opportunity @Refugees pic.twitter.com/39fhQnT65o 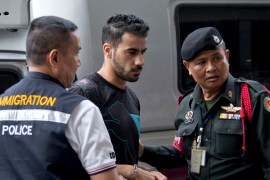 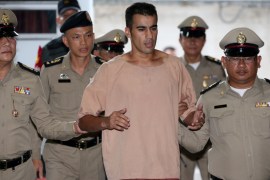