The Washington Post will air a commercial during the Super Bowl on Sunday evening, highlighting the role of journalists and the dangers they can face.

The 60-second commercial, to be narrated by Hollywood actor Tom Hanks, will briefly show several slain or missing journalists affiliated with the Washington Post and other publications, including Jamal Khashoggi who was murdered inside the Saudi embassy in Istanbul last year.

It is not the only initiative that is using the publicity associated with the Super Bowl to keep the spotlight on Khashoggi’s case.

On Saturday, a media advocacy group joined a private organisation to fly a banner demanding justice for the journalist near the stadium where the game will be played.

“There can be no justice until the mastermind who ordered Jamal’s assassination is held accountable,” said David Prum, Director of Airship for Jamal and  #JusticeForJamal.

“From the war on Yemen to the imprisonment and torture of journalists, political opposition figures and women activists, Saudi Arabia is a persistent abuser of human rights,” he added.

Rights group the Committee to Protect Journalists (CPJ) helped publicize the banner and is also planning to host a press conference outside the White House on Thursday.

“This event comes one day ahead of the February 8 deadline for the Trump administration to deliver a report to the Senate on Khashoggi’s murder,” Courtney Radsch, CPJ’s Director told Al Jazeera.

“We want to let them know that people in America are watching, people are following.”

The CPJ is also asking the United Nations to launch an independent investigation into the circumstances surrounding the killing, separate from the one currently being led by Agnes Callamard,the UN’s special rapporteur on extrajudicial executions.

“The investigation that has been launched is not efficient, nor transparent,” Radsch said. “An international investigation is needed to determine facts and ensure justice.”

Jamal Khashoggi was one of 34 journalists that were singled out for murder worldwide last year but because of the way he was killed, he is perhaps one of the most well-known.

Hundreds of journalists are imprisoned around the world today, and many have lost their lives for reporting on dictators and strongmen who fear their voices.

Khashoggi – a Saudi writer, United States resident and Washington Post columnist – entered the Saudi consulate in Istanbul on October 2 to obtain documentation so he could remarry.

He never came out of the consulate.

After weeks of repeated denials that it had anything to do with his disappearance, Saudi Arabia eventually acknowledged that its officials were behind the gruesome murder. Saudi Arabia has yet to disclose the whereabouts of his body.

Other journalists featured in the Post’s Super Bowl commercial include freelance reporter Austin Tice, who has been missing in Syria for more than six years, and Marie Colvin, a US correspondent for the Sunday Times in London who was killed in 2012 by Syrian forces while reporting in Homs.

According to The Washington Post, the commercial shows scenes from major news events from World War II through the present day, ending with the publication’s logo and its slogan, “Democracy Dies in Darkness”.

“The Super Bowl is a remarkable moment to recognise the courage and commitment of journalists around the world that is so essential to our democracy,” said Fred Ryan, publisher and CEO of The Washington Post.

“We decided to seize the opportunity to make this a milestone moment in our ongoing campaign.”

While the publication declined to reveal how much it is paying for the 60-second slot, a CNBC report said CBS is charging a record $5.25m for a 30-second slot.

More than 90 journalists and media workers died in targeted killings, bomb attacks and crossfire incidents last year, according to The International Federation of Journalists (IFJ). 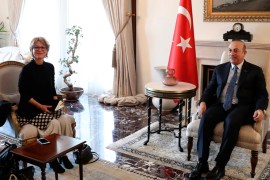 UN Khashoggi probe wraps up in Turkey: what next?