Midfielder Naby Keita of Guinea put the Reds ahead in the 12th minute of the game on Wednesday, finding the net after an assist by Egyptian forward Mohamed Salah.

Their lead only lasted for two minutes though, as Argentine striker Rogelio Funes promptly levelled for the Mexican side in front of a 45,416-strong crowd at the Khalifa International Stadium.

In the second half, a stoppage-time goal by Brazillian forward Roberto Firmino sealed the win for the English Premier League leaders.

“It [the match] was very aggressive and physical and we’re going to have to recover quickly and another trophy is up for grabs on the weekend,” Liverpool midfielder Adam Lallana told reporters after the match.

“It’s massive, we’re European champions and aim to be Club World Cup champions. Not many people can say that, so we’re going to give it our all for that,” the 31-year-old English footballer said.

Liverpool, who last reached the final in 2005, will attempt to lift a maiden trophy at the global club tournament when they face Brazil’s Flamengo in the title match on Saturday.

The Rio team booked their spot by defeating Saudi Arabia’s Al Hilal 3-1 the other semifinal on Tuesday night.

“This Club World Cup is the only international championship that Liverpool hasn’t won, so we’re so excited actually to win it this time and add it to our trophies,” Maythan Kassir, a 29-year-old Reds fan from Lebanon, told Al Jazeera.

Salah, 27, was named the Man of the Match on Wednesday.

Fans from the United Kingdom and Mexico, as well as Doha-based supporters of the two clubs, were in attendance for the highly anticipated match, that was played on the same day as Qatar’s National Day.

Liverpool supporter Bharat Patel and his family travelled from London for the tournament.

“It’s very special because they’ve never won it before and I may not see it in my lifetime,” the 56-year-old accountant told Al Jazeera.

A section of the stadium was filled by vocal Monterrey fans waving their team’s blue and white flag.

“It feels like an illusion to be here seeing my Rayados,” Gerardo Luis de la Paz Garza, a 72-year-old Monterrey supporter, said referring to the team’s nickname.

“I came here so my kids could see the Rayados and witness this,” he told Al Jazeera.

It is the first time Qatar has hosted the annual seven-team club tournament and it comes as it prepares for the 2022 FIFA World Cup. Doha will also stage next year’s edition.

“Qatar’s compact nature offers fans and teams incredible advantages, but together with the local authorities, we have to work on implementation plans to make sure that everything runs smoothly: airport, transportation, accommodation, entertainment options, etc,” the representative of football’s world governing body said.

Monterrey, making their fourth appearance at the tournament, will now try to equal their best previous performance, a third-place finish, when they take on Saudi club Al Hilal on Saturday.

The final will also be played on Saturday at the Khalifa International Stadium, which is one of the two completed World Cup venues. 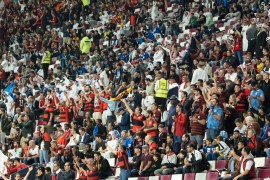 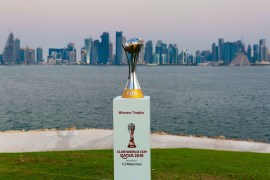 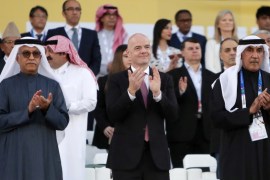 FIFA and the politics of a Gulf feud

FIFA is being dragged into the Gulf’s internal rivalries and that does not bode well for the federation.