Correction29 Aug 2019
An earlier version of this story stated that the Philippine government earmarked at least P6bn ($118m) for the event. The correct amount is P7.5bn ($147m).

Transport delays, footballers training in the streets and two toilets in one stall: A chaotic final build-up has put the Philippines under pressure before the Southeast Asian Games open on Saturday, prompting President Rodrigo Duterte to order an investigation into the issue.

The worst incidents have spilled forth under the hashtag, #SEAGamesfail, including scaffolding clinging to an incomplete stadium renovation and a temporary press room built from unpainted cinder blocks.

In one tweet, the Games’ slogan of “We Win as One”, was twisted into “Wiwi as One” to accompany a photo of one venue’s ladies’ room, where contractors had put two toilets in a single stall – an image that has gone viral.

On Thursday, Duterte’s spokesman, Salvador Panelo, said no one will be spared in the investigation.

“Given the character of this president, friendships will not come into play,” Panelo said, apparently referring to the local organisers, which is headed by Duterte’s 2016 election running mate, Alan Peter Cayetano, who is also currently the House speaker.

On Wednesday, the Philippine Sports Commission in a Facebook post said the photo had been taken “while the facility was under renovation”. It put up the “actual photo” of the ladies’ room which showed a partition between the two toilets at the Ninoy Aquino Stadium.

This is embarrassing for 🇵🇭! 😱😱😱

The Timor-Leste football team were left stranded at the airport, and later taken to the wrong hotel by SEA Games 2019 organisers! 😕❌👀#SEAGames #SEAGames2019https://t.co/2O86LBFmA8

This came on top of the Philippines apologising on Sunday for leaving incoming football squads stranded at the airport or stuck, waiting hours to check in to their rooms.

As part of that episode, one hotel issued this clarification: “We asked them [the players] if they needed chairs but they declined, preferring the floors so they could lie down to rest.”

But Alindogan pointed out that athletes, both local and foreign, have complained and took to social media to express their disappointment.

On Wednesday, Manila-based GMA News reported that the nephew of Brunei Sultan Hassanal Bolkiah, Faiq Hefri Bolkiah, a football player, was hospitalised due to allergic reaction to peanuts, which was included in a dish served to the athletes.

Meanwhile, Thailand‘s men’s footballers trained in the streets near their hotel after their coach complained that the facilities provided were too far away, their coach told the Bangkok Post.

Monico Puentevella, who was organising committee chair in Manila’s 2005 hosting of the Games, was one prominent critic of the preparations.

“You know I’ve been in all SEA Games, Asian Games, Olympics. We never had this treatment before in other countries,” he told a Filipino TV station.

The Games in Clark, Manila and Subic, which run through December 11, are particularly complex with a record 56 sports across dozens of venues that are in some cases hours’ drive apart, even before Manila’s notorious gridlock traffic is factored in.

Rizal Memorial sports complex in central Manila, the home of both the sparse press room and twin toilets, has come in for particularly strong criticism.

Crews were still swinging from scaffolding on the building’s exterior as of Tuesday, wrapping up a renovation of the historic site, which hosted two sold-out Beatles shows in 1966.

The vast scale of the Games has included erecting a enormous sports complex in New Clark City, which is at least two hours’ drive north from the capital.

The stadium and aquatic centre there looked ready for competition during an AFP visit on Tuesday, though workers were still wrapping up last-minute jobs.

“We’ve been working hard and doing extra work overnight so we can finish… for Nov 30 for the SEA Games,” Dianeto Tizon, a labourer, told AFP news agency.

He was putting the finishing touches on the cauldron that will hold the Games’ flame, a 50m tower that has come under fire over its high cost.

It cost Philippine taxpayers nearly $1m, a hefty sum that critics noted would have better served the nation’s millions of poor and children.

Al Jazeera’s Alindongan said that senators have raised questions about how public funds were used to bankroll the project, or if it was overpriced or not.

According to reports, the government earmarked at least P7.5bn ($147m) for the regional sporting event. 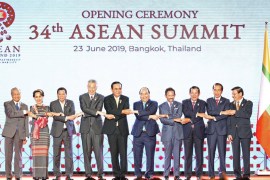 Experts say the 10 ASEAN nations – home to more than 640 million people – have yet to work out the details. 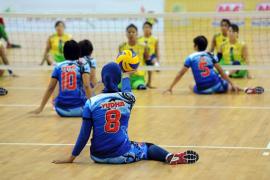 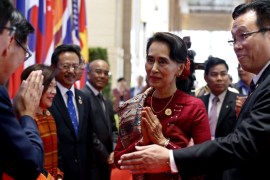