A unified Korean team has made sporting history after winning the first place in the 500-metre women’s dragon boat final in the Asian Games currently held in Indonesia.

It was the first gold medal by a combined Koreas team at a major multi-sport event.

The victory on Sunday came a day after the paddlers delivered the historic first medal for a unified Koreas team by taking bronze in the women’s 200-metre dragon boat competition.

The gold was awarded to Korea, the name for the joint teams that are entered in rowing, canoeing and women’s basketball rather than being added to the tally of either North or South Korea.

The celebrations started as soon as the dragon-headed boat with its 10 paddlers, its drummer and its sweep crossed the line.

The Koreans hugged on the boat and on the banks along the course following their victory.

At the awarding ceremony, the crew members were in tears as they received their gold medals.

South Korean news agency Yonhap quoted Kim Kwang-chol, a North Korean coach, as saying he “felt the strength of a unified nation when we came together, dedicated our minds to a single purpose, and paddled the boat forward”.

The Koreas, still technically at war after their 1950-53 conflict ended in an armistice, have fielded 60 athletes in combined teams in the three sports along with larger contingents for their respective national squads.

Athletes from both countries paraded into the opening ceremony together last weekend behind the “unification” flag, which features the outline of the peninsula in blue on a white background. It took a week to reap the medals.

South and North Korea have entered joint teams in previous international events, starting with the 1991 table tennis world championships, and more recently at the Winter Olympics in Pyeongchang, South Korea.

The women’s Olympic ice hockey team gained huge support despite losing all of its games, and inspired more cooperation.

At the Asian Games, there could be more gold for the Koreas, too, with the combined women’s basketball team reaching the semifinals.

The basketball team, featuring nine South Koreans and three players from the North, next plays Taiwan.

Kim, the North Korean coach, said he was not sure when he took his paddlers to South Korea for practice last month that they had enough time to prepare.

“But I noticed that the North and South Korean athletes’ fighting spirit was so high after watching them train,” Kim was quoted as saying by Yonhap.

“As I saw our boat going forward with the athletes’ combined effort and strength, I felt the united power of Korea.” 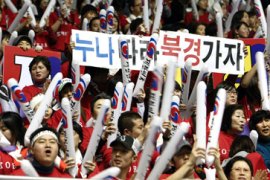 Koreas to cheer on a unified front

North and South Korea will have joint cheering squads at the Beijing Olympics.