Basketball star Kevin Durant has issued an apology for calling India “20 years behind” and a variety of other comments that were criticised as disparaging to the Asian country.

The NBA Golden State Warriors forward posted messages on Facebook and Twitter on Friday to say he is “sorry that my comments about India were taken out of context”.

Durant said he plans to return to India to run more basketball camps and meant no disrespect.

The basketball player travelled to India recently and spoke about the trip in an interview with The Athletic website published this week.

In the interview, Durant marvelled at the “cows in the street, monkeys running around everywhere”, the muddy streets and visible poverty.

He also said India “is a country that’s 20 years behind in terms of knowledge and experience”.

In the same interview, Durant said he thought the Taj Mahal “would be holy ground, super protected, very very clean”.

“And as I’m driving up, it’s like, s***, this used to remind me of some neighbourhoods I would ride through as a kid. Mud in the middle of the street, houses were not finished but there were people living in them. No doors. No windows … It’s just an eye-opener.”

According to an official NBA statement, Durant travelled to India “to support the continued growth of basketball in the country and coach the country’s top prospects at The NBA Academy India”.

The apology is nice but yeah, comments were ridiculous. You live a very privledged life. You visited a place with 1 billion ppl. @KDTrey5 https://t.co/5Lvd1MY4GZ

Durant was playing his first season with the Warriors, having arrived at Golden State from Oklahoma City Thunder.

While in India, Durant was part of setting a new Guinness World Record for the world’s largest basketball lesson with 3,459 participants not including the NBA superstar, according to the Bleacher Report. 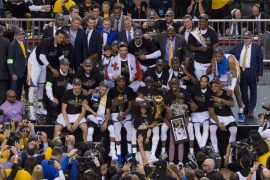