Kenyan long-distance runner Eliud Kipchoge was only 26 seconds from making history on Saturday, when the Olympic champion finished just short of becoming the first person to run a marathon in less than two hours.

Kipchoge ran the 42.2km around the Monza motor racing track in Italy in an impressive two hours and 25 seconds, smashing Dennis Kimetto’s world mark of 2:02:57 by two and a half minutes and raising hopes that one of world sport’s most famous barriers could be broken.

He added: “We are going up the tree … I have lifted a branch and I am going onto the next one. This is not the end of the attempt of runners on two hours.”

However, Kipchoge’s time did not go down as an official world record sanctioned by the IAAF – the world governing body for the sport of track and field athletics – due to variables like pacesetters entering mid-race and drinks being given to runners via mopeds.

Widely considered the best marathon runner in the world, Kipchoge did break his personal best time of 2:03:05, which was set at the London Marathon last year. Kimetto set the world mark in Germany’s capital, Berlin, in 2014.

It was not a typical road race. Instead, runners completed 17.5 laps around the 2.4km Monza Formula One track.

The Breaking2 project was held on the 63rd anniversary of Roger Bannister breaking the four-minute mile in 1954. The Monza track was selected after extensive research that included average temperature, air pressure and wind levels.

Kipchoge was backed by a small army of scientists put together by Nike, and helped by an ever-changing battalion of pacesetters. Nike’s attempt at breaking the two-hour barrier was three years in the planning and used a shoe that its designers say will make runners four percent more efficient.

Requiring the sort of evolutionary leap against the clock that is usually only achieved over decades, Kipchoge started in promising fashion.

Despite being one second over the target time after five kilometres, he was clocked at five seconds under after 10 then 15km.

The Kenyan continued in his trademark relaxed style and passed the halfway mark in 59:54, and was still two seconds inside the target at the 25km mark.

But over the remaining third of the race, which began at 05:45 local time (03:45 GMT) in slightly humid conditions, Kipchoge steadily began to fall behind pace.

Kipchoge would have needed an average of less than 4:35 per mile – an improvement of about seven seconds per mile on Kimetto’s record, or around 2.5 percent.

His average pace of 4:36 per mile was just not enough, despite his final sprint to the tape.

“I rank this as the highest-ever performance in my life,” Kipchoge said. “The aim of ‘Breaking2’ was to pass the message that running less than two-hour marathon is possible. That message is really special to me.”

Yannis Pitsiladis, a professor of sport science at the University of Brighton, told Al Jazeera they are working on a similar project to Breaking2 to use scientific innovations to boost running efficiency and help athletes break the two-hour marathon.

Pitsiladis said they want innovations in science to help other athletes, including recreational runners. “That’s really one of the legacies of our project.” 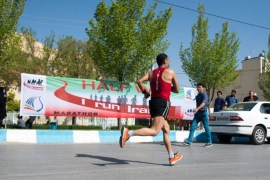 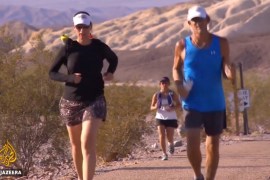