Mercedes driver Lewis Hamilton steered clear of a chaotic start to the Chinese Grand Prix and coasted to victory ahead of Ferrari’s Sebastian Vettel in second and Max Verstappen of Red Bull who finished third.

Hamilton crossed the line 6.2 seconds ahead of Vettel, the winner of last month’s season-opening race in Australia, to claim his fifth win in Shanghai.

The Brit started from pole position and led from beginning to end to capture the 54th race title of his career and his first of the new Formula One season.

Verstappen improved from 16th position on the starting grid to finish third, fighting off a spirited challenge from teammate Daniel Ricciardo on the final lap.

A drama-filled start on a wet track from rain earlier in the day set the stage for Hamilton’s victory and Mercedes’ recovery after Vettel surprisingly captured the season’s opening race at the Australian Grand Prix last month.

A number of drivers failed to finish. Lance Stroll and Antonio Giovinazzi never returned after their early mishaps, and they were joined on the sidelines on lap 20 when McLaren’s Stoffel Vandoorne and Toro Rosso’s Daniil Kvyat retired with mechanical problems.

McLaren’s other driver, Fernando Alonso, was also forced to stop on lap 34 with what he said was a driveshaft problem.

The veteran Spanish driver had been running eighth at the time, a strong race considering McLaren’s considerable mechanical issues to start the season.

Only one driver has won more #F1 races than @LewisHamilton 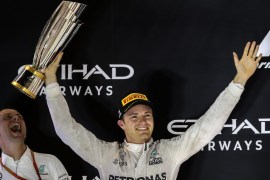 Rosberg won his first Formula One crown after finishing second in a tense Abu Dhabi Grand Prix on Sunday.