Israel is using backdoor diplomacy to block Palestinian calls for FIFA to impose sanctions over football clubs based in illegal settlements in the occupied West Bank, the Palestinian Football Association (PFA) has said.

The PFA argues that the teams’ inclusion within Israeli leagues seeks to normalise Israel’s claim to Palestinian territories it occupied in 1967.

FIFA, the world football governing body, is meeting for its 2017 Congress in Bahrain next month and could decide what action to take over the six clubs.

“I have been informed of Israel’s movements by people who have directly been approached by Israeli diplomats,” Susan Shalabi, PFA vice-president, told Al Jazeera on Thursday.

“By involving diplomats in this issue, Israel is breaching FIFA’s statutes again.

“Our position on this matter is very clear: We can’t accept Israeli football association running its activities on our territory. If we accept a compromise, we will be part of the crime.”

The Israeli foreign ministry has instructed its embassy staff worldwide to persuade the country representatives to FIFA to foil any plans of Palestinian officials pressing ahead with the ban, Haaretz reported on Thursday.

“Our growing assessment is that the FIFA Congress is liable to make a decision on suspending six Israeli teams that play over the Green Line, or even on suspending Israel from FIFA,” said a cable sent by the ministry, according to the Haaretz.

“We urge you to contact your countries’ representatives on the FIFA Council as soon as possible to obtain their support for Israel’s position, which rejects mixing politics with sport and calls for reaching an agreed solution between the parties … and to thwart an anti-Israel decision if it is brought before the council.”

The AFP news agency, quoting an Israeli official, reported that “dozens of Israeli ambassadors have received instructions to engage in dialogue with FIFA delegates in the countries where they are posted to counter the attempt by the Palestinians”.

Earlier this month, Palestinian football chief Jibril Rajoub renewed calls for FIFA to exclude Israel from international competition until the teams are barred.

Rajoub said maintaining the status quo would be a violation of the world body’s statutes, which ban any federation from organising matches on a territory that is not its own, without the agreement of the federation of the country concerned.

FIFA statutes prohibit member states from establishing teams in an occupied area and making them part of its own league.

In 2015, former South African minister Tokyo Sexwale was then appointed head of a monitoring committee to oversee issues affecting the development of football in Palestine.

Sexwale met heads of both federations in Zurich last month, a meeting described as “stormy”.

According to AFP, Sexwale gave three possible options to solve the ongoing dispute, including retaining the current state of play and giving the Israeli federation the chance to remedy the situation involving the six clubs.

Rajoub said none of the three options met Palestinian expectations.

In September last year, a Human Rights Watch report said that settlement playing grounds, including one indoor hall, were built on land that was “unlawfully taken from Palestinians”.

“The settlement teams act as feeders for teams in the upper Israeli leagues, which compete in Europe and beyond,” it said. “By holding games on stolen land, FIFA is tarnishing the beautiful game of football.” 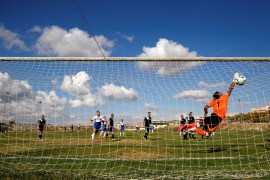