After the Catalan parliament declared independence from Spain on Friday, many have started to question what effect it will have on the future of Catalonia’s biggest football club, FC Barcelona.

The Spanish Senate responded to the declaration by approving direct rule in the breakaway region.

We take a look at what will likely happen to the popular football club the political crisis unfolds.

On October 1, more than two million people, or 90 percent of those who cast a ballot, voted “Yes” to Catalonia breaking away from Spain.

The Spanish team joined a countrywide strike early October to protest against “the serious events which took place during the day of the Catalan referendum on independence”.

On Friday, the Catalan parliament declared independence, leaving the region’s future hanging in the air.

The team currently sits top of the league rankings and has won 24 La Liga titles.

The club’s president, Josep Maria Bartomeu, has said during Barcelona’s annual general meeting that the club wants to stay in La Liga.

“We will never put the club nor its presence in any competition at risk. That’s why, to all the socios (members), I say that we want to continue playing in La Liga and, as of today, our participation [in La Liga] is guaranteed,” he said according to Reuters.

“It’s mutually beneficial for La Liga and Barcelona for that link to continue,” Bartomeu concluded.

Previously, Bartomeu said the club would have to consider the option of leaving the national league in the event of Catalonia’s split from Spain.

“The situation concerning Barcelona’s future in La Liga does not exist so far,” he told reporters earlier this month. “But, with regards to what can happen in the future, the board of directors will discuss options.”

He added: “We will find the best solution. If independence happens, we need to discuss things carefully.”

Football analysts say the only way the four-time European champions can remain in the Spanish league following a secession is if amendments are made to the country’s laws.

“The sports law and the regulations will have to be changed in the Spanish parliament for Barcelona to be accepted in the Spanish league,” Guillem Balague, Spanish football journalist, told Al Jazeera.

“There is no other way for Barcelona to be part of the league after independence.”

Despite speculations of a possible move to the English Premier League (EPL), experts believe the Catalan team’s top priority would be to stay in the Spanish league.

Keeping Barcelona in La Liga is also in the interest of the league and the club’s archrival, Real Madrid, said Balague.

“In the longer term, La Liga without Barcelona would be conceivably too damaging to both the club and the league,” said Al Jazeera’s sports correspondent Lee Wellings.

Other Catalan teams, RCD Espanyol and Girona – both in Spain’s first division – also find themselves in the same boat as Barcelona.

FC Barcelona, famously called Barca, has expressed support for Catalonia’s right to choose but has stayed clear of openly backing the region’s independence.

It is among at least 4,000 signatories of the National Agreement on the Right to Decide and the Referendum Agreement, a group comprising political parties and civil society organisations in favour of the independence vote.

Pro-independence supporters in Barcelona chant at the 17th-minute mark at all home games to remember the events of the year 1714 when Catalonia lost its autonomy to Spain in the War of Succession.

Barcelona defender Gerard Pique is among those who has openly voiced his support for an independent Catalonia.

He is regularly jeered and whistled at on field during national league matches outside of Barcelona and while playing for the Spanish national team.

Al Jazeera’s Wellings said Pique “is one of those [in the team] most affected by the current situation”.

The team has a large fan base both at home and abroad.

FC Barcelona has almost 25 million followers on Twitter, and more than one billion Facebook likes on its official page.

“Barcelona does not have the same fan base throughout Spain as Real Madrid,” said Wellings.

“It is the jewel in Catalonia’s crown, and the popularity outside of the region comes in global recognition. They are one of the world’s most successful and popular football clubs, and indeed sports brands.” 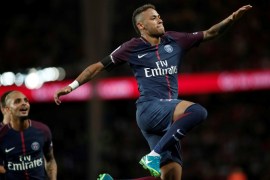 La Liga side wants ex-striker to pay back the bonus for an October 2016 contract that tied him to the club through 2021.