Professional American football players continued their protests against police brutality on Sunday despite ongoing blowback from right-wing US President Donald Trump and other politicians.

At least 22 players across the National Football League (NFL) participated in the protests, according to the Associated Press’ count.

On Monday morning, Trump tweeted his latest in a series of verbal attacks on the protesting athletes, accusing the players of “showing total disrespect” to the country and its flag.

Two dozen NFL players continue to kneel during the National Anthem, showing total disrespect to our Flag & Country. No leadership in NFL!

During the San Francisco 49ers-Dallas Cowboys game on Sunday, at least eight players from the 49ers knelt during the anthem, while no player from the Cowboys participated in the protest.

Cowboys owner Jerry Jones has vowed bench any player on his team who kneels during the customary performance.

Dallas’ defensive linesman David Irving, however, raised his fist at the end of the game in solidarity with the ongoing protests.

Several other players from teams across the league knelt, raised their fists or stayed in the locker room during the anthem.

The protest gestures come as Trump and other politicians ramp up their criticism of the campaign against police brutality, which started last year when former 49ers quarterback Colin Kaepernick began kneeling during the anthem.

Kaepernick’s public stand against police brutality that disproportionately targets African Americans started in August 2016, but it quickly spread throughout the league and has continued to inspire athletes to kneel during the national anthem well into the 2017 season.

Trump first entered the public debate over the protests when he urged NFL owners to fire players involved in the protests last month during a campaign-style rally in Huntsville, Alabama.

Although Trump said his comments had “nothing to do with race”, critics have argued that the president was motivated by racism and a hope to distract the public from what they describe as policy failures.

Issac Bailey, a journalist and interim member of the Charlotte Observer editorial board, argued that Trump’s comments have largely backfired.

“I doubt that would have become reality, had Trump not tried to force the NFL’s hands; because though the protests had been in place for more than a year, they got a lot more attention because of Trump’s tweet,” Bailey, who is also James K Batten Professor of public policy at Davidson College, told Al Jazeera.

“That forced the NFL’s hands. But we shouldn’t forget that this began because Colin Kaepernick was courageous enough to take a knee.”

The NFL protests have spilled over into other athletic arenas, sparking similar demonstrations in college and high school sporting events.

Earlier this month, Vice President Mike Pence stormed out of a game between the Indianapolis Colts and the San Francisco 49ers when players knelt during the anthem.

Daniel Grano, a professor who teaches sports, politics and race at the University of North Carolina, Charlotte, said that Trump has sought to change the focus of the protests.

“The original intent of the protests as Kaepernick began it has become largely obscured,” he told Al Jazeera, arguing that there is now “a set of competing interpretations” of the protests.

“The subject of race and policing is still very much alive in the minds of the players who continue protesting,” he said.

Roger Goodell, the NFL commissioner, held meeting with NFL executives and team owners to discuss the ongoing protests last week in Manhattan. No decisions were regarding a punishment for players who refused to stand during the anthem.

The subject of race and policing is still very much alive in the minds of the players who continue protesting.

In 2016, almost a quarter of the 1,093 people by police were African American, although they only comprise some 12 percent of the country’s population, according to The Guardian’s database, The Counted.

Killed By Police, a monitoring group, has recorded at least 969 people killed by police so far in 2017.

After Trump’s comments in Alabama in September, several team owners joined players on the field for a show of unity. Many of them locked arms with the athletes, while the NFL opted not to fine players who did not amass on the sidelines during the anthem.

“The owners for a single weekend showed an apparent form of solidarity, but it wasn’t related – in my estimation – to the politics of the protest,” he said. “It was related to the protection of the brand.” 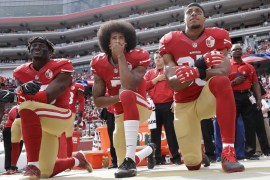 ‘Take a knee’ anti-racist protests move beyond the NFL

Inspired by Colin Kaepernick’s protest, high school athletes, and others are putting spotlight back on police brutality. 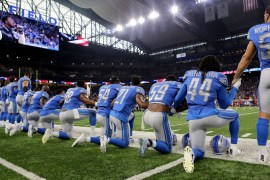 How have black writers responded to Trump’s NFL attack?

US President Donald Trump urged NFL owners to fire any ‘son of a b****’ who ‘disrespects our flag’.