FIFA, football’s international governing body, will expand the World Cup to 48 teams, adding 16 extra nations to the 2026 tournament, which is likely to be held in North America.

President Gianni Infantino’s favoured plan – for 16 three-team groups with the top two advancing to a round of 32 – was unanimously approved on Tuesday by the FIFA Council.

It meets Infantino’s election pledge of a bigger World Cup, and should help to fund promised raises for FIFA’s 211 member federations.

“It was a very easy thing for him to do. There was no resistance to it,” he said.

With 80 matches instead of 64, FIFA forecasts the equivalent of $1bn extra income at current rates from broadcasting and sponsorship deals, plus ticket sales, compared with $5.5bn revenue forecast for the 2018 World Cup in Russia.

READ MORE: Inside the CONIFA World Cup for unrecognised states

FIFA’s six continents should find out by May how many extra places they will get.

UEFA wants 16 European teams at the tournament, which is strongly favoured to be played in North America.

The North American region has not hosted the World Cup since the 1994 tournament in the United States.

American, Canadian and Mexican soccer leaders have had initial talks about a co-hosting bid.

Africa and Asia could be winners in a bigger World Cup, with up to nine places each. They had only five and four teams, respectively, at the 2014 World Cup in Brazil.

Still, FIFA said it expects the standard of soccer to drop compared with the 32-team format locked in for the next two World Cups in Russia and Qatar.

FIFA must break with soccer tradition to make its new format work after an original 48-team plan – with an opening playoff round sending 16 “one-and-done” teams home early – was unpopular.

Instead, three-team groups will replace the usual groups of four to create simple progress to a knockout bracket.

However, it leaves one team idle for final group games and could risk collusion between the other two teams.

FIFA said it could guard against result-rigging by introducing penalty shootouts after group games that end in draws. 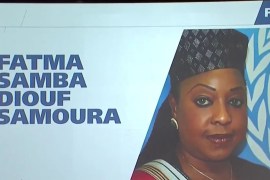 Fatma Samoura, a Senegalese UN official who has worked across Africa for two decades, is due to assume her role in June. 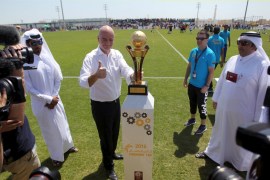 FIFA to set up worker welfare body for Qatar 2022

FIFA chief visits host country for the football World Cup which is under the spotlight for its human rights record.