The move from Barcelona to the French club, which is known as PSG, will also see the 25-year-old pocket $34m after taxes, making him the highest paid footballer in the world.

The fee is more than double the 105m euros ($124.7m) Manchester United agreed with Juventus to bring Frenchman Paul Pogba to northern England.

But for many on social media, the huge sum – as opposed to the prospects of trophies – is what has seen people dreaming.

Many pondered what they could buy for the Brazilian’s price-tag, with ideas ranging from battalions of Challenger tanks and properties in London’s most expensive areas, to the number of chocolate bars or cups of coffee.

Others thought about how such a sum could be used to alleviate problems, such as the ongoing Syrian refugee crisis.

Here, we list just some of what you could do with $263m at current prices:

137 properties in London’s most expensive borough

Anxiety about housing is growing in the UK, with many young people unable to afford properties in the capital due to runaway house price inflation.

1,004 four-year degrees for students at MIT

The Massachusetts Institute of Technology (MIT) ranks as one of the best universities in the world, but studying there can set a student back around $65,000 a year in tuition fees and living costs.

Student debt in the United States is estimated at around $1.44 trillion.

Neymar has his work cut out trying to compete with a passenger airliner, with the price of one standard-sized jet costing between $224m and $300m depending on the model.

It costs India around $229 to provide primary education to a pupil for one year in one of its state schools.

Around 8.4 million children in the country are out of the education system.

According to the Wall Street Journal, the former US president received $260,000 for a speech in 2014 that lasted less than an hour.

Assuming the same rate, Neymar’s transfer fee could buy 1,011 hours with the former US president, or 42 whole days.

Run the US military for three and a half hours

With a proposed budget for 2018 of $639.1bn, Neymar’s transfer fee would allow the US military to operate for a few hours.

The US has the largest military budget in the world, followed by China at $215bn.

Just over 2.25 percent of global GDP goes to military spending, according to the World Bank.

The 1335-acre Greek island of Dulichium is currently on sale for $44m.

The IMF estimates 2 percent of global GDP each year is lost to corruption, or roughly between $1.5 trillion and $2 trillion.

Neymar’s fee would barely make a dent in recovering this money, at 0.013 percent.

Run a Syrian refugee camp in Turkey for 11 years

The Kilis Oncupinar facility is home to around 14,000 refugees fleeing the war in Syria and costs around $2m a month to operate.

Three-quarters of a Lionel Messi

Neymar’s former Barcelona teammate has a release clause in his contract of around 300 million euros ($354m). 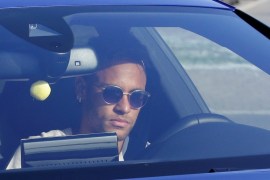 The forward joins Paris Saint-Germain from Barcelona for a mind-boggling $263m and reputed weekly salary of $653,000. 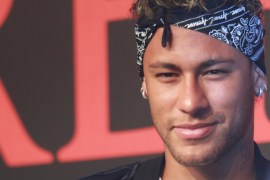