Real Madrid ended their five-year wait for the La Liga title as Cristiano Ronaldo and Karim Benzema scored in a 2-0 win at Malaga, clinching a 33rd league triumph.

Real needed just a point to wrap up the title and raced into the lead when Ronaldo scored in the second minute, ensuring that the champions scored in every league game of the season. Benzema wrapped up the win early in the second half.

Real finished the campaign on 93 points after a sixth straight league win since going down 3-2 to Barcelona in April.

Last year’s champions Barcelona finished second on 90 points after coming from two goals down to beat Eibar 4-2 at home.

Barcelona manager Luis Enrique was given a warm send-off at the Camp Nou as he was greeted with a giant banner reading “One of us for ever”.

And Barca at least salvaged some pride by fighting back from 2-0 down to avoid a first ever defeat against Eibar.

Japanese midfielder Takashi Inui had the visitors dreaming as he hit a pair of sweetly struck half-volleys in off the underside of the crossbar either side of half-time.

However, David Junca turned into his own net after Neymar had hit the post to start Barca’s revival 25 minutes from time.

Yoel Rodriguez produced an incredible save to deny Lionel Messi from the penalty spot moments later.

Barca were not to be denied a sixth straight win to end the season, though, as Luis Suarez bundled home from close range before Messi made amends with his second penalty 15 minutes from time.

And Messi rounded off the scoring with his 53rd goal of the season in stoppage time. 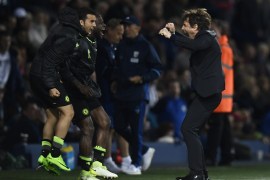 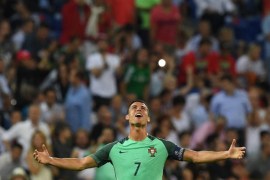 Portugal and Real Madrid star caps off remarkable year where he won Euro 2016 and Champions League.