San Francisco 49ers quarterback Colin Kaepernick has been refusing to stand for the national anthem before NFL games in protest because the United States “oppresses black people and people of colour”.

Kaepernick sat on the team’s bench on Friday night during the anthem before a pre-season game, drawing boos from some fans and attracting criticism on social media.

Kaepernick, a former starter who led San Francisco to the 2013 Super Bowl but has since been demoted to back-up, said he sat on the bench to make a statement about racial injustice in the US.

“I’m not going to stand up to show pride in a flag for a country that oppresses black people and people of colour,” Kaepernick told NFL Media on Saturday.

“To me, this is bigger than football and it would be selfish on my part to look the other way.”

Kaepernick appeared to be referring to police use of deadly force, which has come under increased criticism in recent years as incidents have been captured on mobile phones.

“If they take football away, my endorsements from me, I know that I stood up for what is right.

“There are bodies in the street and people getting paid leave and getting away with murder.”

The 49ers, who have unsuccessfully tried to trade Kaepernick to another team since his demotion, issued a statement of support after the game.

Stand up for what you believe in @Kaepernick7 But remember, there is no way to gain respect for a cause by showing disrespect #Truth 🇺🇸🇺🇸

“The national anthem is and always will be a special part of the pre-game ceremony,” the team said.

“In respecting such American principles as freedom of religion and freedom of expression, we recognise the right of an individual to choose and participate, or not, in our celebration of the national anthem.”

Two seasons ago, players on the NFL’s St Louis Rams entered the stadium for a home game with their hands raised, a reference to the “Hands Up, Don’t Shoot” slogan adopted by protesters in demonstrations against the shooting of an unarmed black teenager in Ferguson, Missouri.

An NFL spokesman said that “players are encouraged but not required to stand during the playing of the national anthem”.

Coach Chip Kelly said he had not talked to Kaepernick about his actions or comments but said that the player did not stand for the national anthem before last week’s game in Denver when he was injured and did not play.

“We recognise his right to do that,” Kelly said. “It’s not my right to tell him not to do something. That’s his right as a citizen.”

Kaepernick, who is bi-racial, was adopted and raised by white parents. He has been outspoken on his Twitter account on civil rights issues and in support of the Black Lives Matter movement .

Athletes have long used their fame to make political statements, as typified by the Olympic sprinters Tommie Smith and John Carlos holding up their fists in a black power salute during a medals ceremony in 1968.

In 1996, NBA player Mahmoud Abdul-Rauf refused to stand for the anthem, saying the US had a history of tyranny and doing so would conflict with his Islamic beliefs.

The NBA initially suspended him before the ban was lifted when he said he would stand and pray silently during the song.

Kaepernick said he is not worried about any potential fallout from his protest.

“This is not something that I am going to run by anybody,” he said.

“I am not looking for approval. I have to stand up for people that are oppressed.” 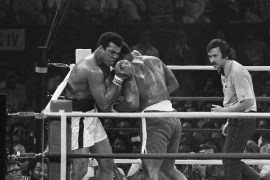 “His legacy is just as meaningful now as it was when he held the belt over his head in triumph.”