Banned former FIFA president Sepp Blatter has denied allegations he enriched himself over the past five years at world football’s governing body.

“Everything is clean and fair as my lawyer, Richard Cullen, has said,” Blatter told DPA news agency on Saturday.

His comments follow an internal investigation at FIFA that said Blatter and two other former FIFA top officials enriched themselves by more than 79 million Swiss francs ($82m) from 2011 to 2015.

Blatter’s US lawyer Cullen had said later on Friday: “We look forward to showing FIFA that Mr Blatter’s compensation payments were proper, fair and in line with the heads of major professional sports leagues
around the world.”

In the latest developments to rock FIFA, its lawyers said Blatter, former secretary-general Jerome Valcke and former finance director Markus Kattner made “a coordinated effort … to enrich themselves through annual salary increases, World Cup bonuses and other incentives”.

Blatter and Valcke were banned for six and 12 years respectively by FIFA’s ethics committee in February. Both deny wrongdoing.

Kattner was last month dismissed as FIFA’s deputy secretary for “breaches of his fiduciary responsibilities in connection with his employment”. 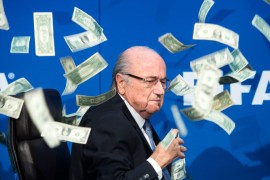 Internal report says ex-FIFA boss and two other top officials were involved in coordinated effort to enrich themselves. 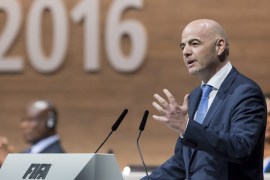 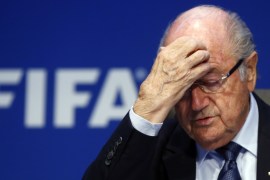 Move to suspend head of football’s governing body comes after Swiss officials opened a criminal case against him.