Garbine Muguruza achieved the rare feat of overpowering Serena Williams to claim her maiden Grand Slam title with a 7-5 6-4 win over the world No 1 and defending champion in the French Open final on Saturday.

The 22-year-old fourth seed, who lost to Williams in last year’s Wimbledon final, became the first Spaniard to lift the Suzanne Lenglen Cup since Arantxa Sanchez Vicario in 1998.

“I can’t explain with words what this day means to me,” Muguruza said during the awarding ceremony.

“This is the big tournament in Spain and Rafa [Nadal] is our champion,” she said courtside, referring to the nine-times men’s winner who pulled out with an injury last week.

“She won the first set by one point. That just goes to show you really have to play the big points well and I think she played the big points really well,” Williams said.

Although her hard-hitting game seems more suited to faster surfaces, Muguruza won 14 consecutive sets en route to the final after losing her opening set of the tournament.

An anxious player by her own admission, she managed her emotions on Court Philippe Chatrier, saving six of eight break points against Williams, who had only lost only four of her 26 previous major singles finals.

It was Muguruza’s first final on the slow surface and she relied on a powerful first serve and jaw-dropping winners down the line to subdue the American in a battle of will.

Meanwhile, Williams vowed to keep chasing down Steffi Graf’s record of 22 Grand Slam titles after it remained once again tantalisingly out of reach thanks to Muguruza’s triumph on Saturday.

Williams’s titles count at the majors has stalled on 21 ever since she lifted a sixth Wimbledon crown last year by beating Muguruza in the final.

Williams had struggled with an adductor injury at Roland Garros, a condition not helped by the unseasonal chill and damp. 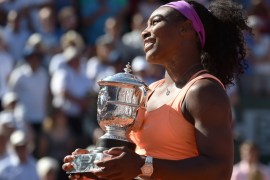