Amnesty International has urged Brazilian authorities to prevent police brutality and respect human rights as they prepare to host this summer’s Olympic Games.

In a report published on Thursday, the human rights group called on the state government of Rio de Janeiro, which hosts the Games in August, to end what it called “a systematic use of excessive force in slums.

“Brazil is at risk of repeating the deadly mistakes it has been making in policing for decades,” Amnesty said in the “Violence has no place in these Games” report.

Brazilian authorities and sports governing bodies in Rio have put in place the same “ill-conceived security policies” which led to a sharp increase in homicides and human rights violations by security forces since the 2014 World Cup, the group said.

The UK-based organisation said there has been a surge in killings during operations involving police and armed forces.

One in every five killings in the city were committed by police on duty, it added.

In an interview with The Associated Press on Thursday, Atila Roque, Brazil’s director of Amnesty International, called on the government to reform protocols and conduct thorough investigations for each police-involved shooting, especially in slum areas.

“Police officers are going into these neighbourhoods with the intention of fighting the enemy,” Roque said.

“Their initial response is very violent.”

Many of the hundreds of slums in Rio are controlled by heavily armed drug traffickers. Police operations in such areas often lead to shootouts.

Roque said he was worried that increased security for the Games could result in more bloodshed in rough neighbourhoods.

“In mega-sporting events, you send more police officers who follow the same logic,” Roque said. “The natural result is a higher death toll.”

Rio law enforcement officials provided a much lower number of police-related deaths for part of the same period, only offering the estimate for areas where they have set up neighbourhood police units.

In a statement, the State Public Safety Department said there were 17 deaths in the first half of 2015 “due to police intervention”, without providing further statistics.

The department also said it had taken measures to reduce police-involved killings, such as decreasing the use of rifles and improving training.

Since 2007, more than 2,000 officers have been suspended for excessive use of force.

Rio state officials previously said that they were planning to deploy 47,000 police officers and 38,000 soldiers to secure the city during the games in August. 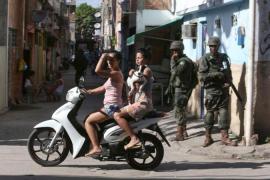 Government signs off use of military to secure upcoming games after years of limited success in war against drug gangs. 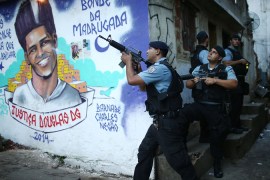 Rio’s ‘pacification’ programme in the spotlight as police killings continue during the World Cup.