Nairobi, Kenya – Rugby returns to the Olympic Games in Rio and Kenya will be the only women’s team from Africa.

But it wasn’t meant to be them. South Africa had qualified but the country’s Olympic committee, SASCOC, does not allow its teams to qualify for the Olympics by winning continental titles.

So, in December, runners-up Kenya found out they would be on their way to Rio.

“It was emotional for us,” said coach Mike Shamiah. “It is a huge, huge, huge addition to our plate. It is the dream of every athlete to take part in the Olympics. It is a very tough call for South Africa to bail out given the work their athletes had put in to prepare.

“They were sure they were going to the Olympics. Tough luck for them.”

Rugby has not been in the Olympics for 92 years and returns with the Sevens format of the game.

Kenya’s men’s team have recently enjoyed great success in this version of the sport. Earlier this year, they won their maiden Sevens Series title in Singapore.

The country celebrated that victory with billboard and radio advertisements across the capital, Nairobi.

“The men’s performance has been one great inspiration to all of us as coaches and players,” Shamiah told Al Jazeera.

“Some days we train with the boys in the gym. We see them train, we see what they do and how they do it. It’s a big thing for the girls to see, to walk in their footsteps and copy from them. We hope they will do the same as the boys.

“It’s a big encouragement all over the rugby fraternity to see a Kenyan win in the World series. It has brought in a lot of things to the game and a lot of fans back to the stands.”

The women’s team, known as the Lionesses, wants to emulate the men’s success but funding issues have hampered its progress.

“The women’s team has no sponsor. We have a lot of challenges but we work with what we have. Putting girls in a high-performance environment is really expensive. Without a sponsor these girls really struggle a lot.”

Some players struggle even to afford transport in the congested city and arrive more than an hour late to a training session.

Normally the team trains three times a week and many of the players juggle this with jobs such as secretaries, accountants or IT specialists.

“We really struggle but appreciate any little that we get,” team captain Kate Abilla said.

“The management does its part.”

Abilla plays her club rugby for Mwamba RFC, one of six women’s teams in Kenya.

“In recent years, we only used to have two clubs. Now that we have six clubs, women out there are getting more interested in the game.

“Our union is insisting that every club has a women’s team to get funding. So it’s a must.”

With no sponsor, the national players train wearing a variety of attire: from leggings to hot pants. The grass is long at the Harlequins ground in Nairobi and their drills take place with old rugby balls.

Shamiah has coached the Kenyan women in these conditions for the past three years.

“The government needs to do something,” she said.

“We are getting a bit of support from World Rugby and from well-wishers here and there. If Kenya steps up to take up this team, things will be much better and different.”

The sport’s governing body World Rugby have invited the team to a training camp in Rome ahead of the Olympics. They’ve also invited high-performance coach Peter Harding to bring his expertise from his time with the Australian and Tongan national teams.

But time will tell if this will be enough for the Lionesses to roar in Rio. 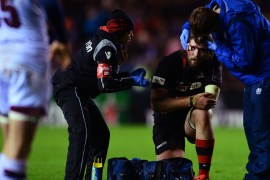