Former world No 1 Maria Sharapova announced that she failed a drugs test at the 2016 Australian Open, saying a change in the World-Anti-Doping Agency banned list led to the violation.

Sharapova, a five-time Grand Slam champion, said in Los Angeles on Monday that she tested positive for meldonium, a substance she had been taking since 2006 but one that was added to the banned list on January 1 this year.

“I failed the test and take full responsibility for that,” said Sharapova, who is currently ranked seventh in the world.”

The 28-year-old Russian, the highest-earning woman in sport, will be provisionally suspended from March 12, the International Tennis Federation has confirmed.

“Ms Sharapova will be provisionally suspended with effect from 12 March, pending determination of the case,” said a federation statement.

Sharapova has not competed since she lost to Serena Williams in the quarter-finals of the Australian Open in January and has struggled with a series of injuries in recent years.

She withdrew last week from the Indian Wells Masters starting this week, an event she won in 2006 and 2013.

“I was first given the substance back in 2006. I had several health issues going on at the time. I was getting sick very often  and I had a deficiency in magnesium and a family history of diabetes, and there were signs of diabetes. That is one of the medications, along with others, that I received.

“I had been taking this medicine for the past 10 years, but on January 1 this became a prohibited substance which I did not know.”

Sharapova burst on to the WTA by winning Wimbledon in 2004 at 17, becoming the third youngest Wimbledon winner. She won the US Open in 2006, the Australian Open in 2008 and finished off her career title sweep of all four majors in 2012 with a trophy at Roland Garros, adding a second French honours in 2014.

Several athletes have tested positive for the drug since it became illegal in January, including two Ukrainian biathletes and Russian cyclist Eduard Vorganov. 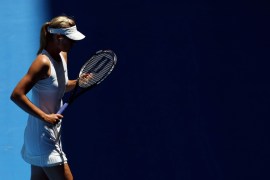 Inside the superstitious mind of a tennis player

From Borg’s no-shave rule at Wimbledon to Nadal’s bottle placement on-court, why are some players obsessed with rituals?