Substitute Gareth Bale, playing his first match since a calf injury in mid-January, rounded off the rout on Saturday nine minutes from time as Real recovered from the 1-0 derby loss at home to Atletico Madrid last weekend.

A return to form may be too late for Real in La Liga, nine points adrift of leaders Barca who play at Eibar on Sunday, but it has come in good time for next week’s Champions League last-16 second-leg tie against AS Roma which they lead 2-0.

After a first-half opener from defender Pepe, Ronaldo struck four times between the 50th and 76th minutes to take his La Liga tally to 27 and overtake Barcelona’s Luis Suarez, who has 25, as the league’s top scorer.

Messi had caught up with Ronaldo on 35 hat-tricks each in all club competitions with a treble in Barcelona’s 5-1 win at Rayo Vallecano on Thursday.

The win put Real one point behind Atletico Madrid before they visit Valencia on Sunday and seven clear of Villarreal, who are at home to Las Palmas later on Saturday. 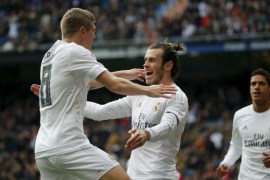 Manchester United fall to third behind Barcelona, but former Premier League winners expected to top the list next year. 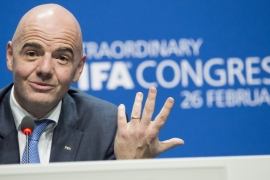 Can the new boss of FIFA clean up the beautiful game?