Gianni Infantino has been elected as the new president of FIFA, succeeding the banned Sepp Blatter on a term until 2019.

Infantino, the UEFA general secretary, received 115 votes in Friday’s second round of voting, more than the required majority of 104 votes from the 207 members.

The other favourite, Sheikh Salman Bin Ebrahim Al Khalifa of Bahrain, had 88 votes.

The 45-year-old former lawyer saluted voters by patting his right hand over his heart, and had to compose himself before starting his acceptance speech.

“We will restore the image of FIFA and the respect of FIFA. And everyone in the world will applaud us,” Infantino said, referring to bribery and corruption investigations that have rocked football’s governing body and forced Blatter out of office after more than 17 years as president.

“I want to be the president of all of you … It is time to return to football. FIFA has gone through hard times, crisis times,” said Infantino.

“These times are over … We have to win back the respect, and focus on this wonderful game that is football.”

In the first round, Infantino surprising led with 88 votes. Sheikh Salman had 85 votes, Prince Ali 27, and Champagne seven.

RELATED: ‘I’ll be back’, vows Blatter after football ban

Al Jazeera’s sports correspondent Lee Wellings, reporting from Zurich, said the pledge of financial support by Infantino to FIFA members might have tilted the balance of votes in his favour.

“Very few people who were at Infantino’s manifesto launch felt he could be taking the top job. He put together a good event there and a good campaign,” he said.

“What might have been crucial is the pledge of money that Infantino made. But can he back that up by finding that money? We’ll see. But that would have made a huge difference because old habits die hard at FIFA.”

Infantino is the second straight FIFA president from the Valais region in the Swiss Alps. Infantino is from Brig and replaces the 79-year-old Blatter, who was born in neighbouring Visp.

Blatter was forced out by the pressure of American and Swiss investigations of corruption that hit FIFA two days before the previous election in May.

There were only four candidates on Friday’s ballot after Tokyo Sexwale withdrew during his campaign speech to voters, and all four went forward to the second round.

Not since 1974 has a second-round vote been held in a FIFA presidential election.

Then, Joao Havelange of Brazil beat 13-year incumbent Stanley Rous of England 68-52 after an initial 62-56 ballot in Frankfurt, Germany.

Infantino exceeded most observers’ expectations after an impressive 15-minute pitch, only 20 minutes before first-round voting began.

The Swiss-Italian spoke in several languages without notes and portrayed himself as a leader for the world, not just his own wealthy confederation.

“We have to get Europe to do much more,” Infantino said.

Set of reform passed at Congress

Earlier, the Congress had overwhelmingly passed a set of reforms intended to make FIFA more transparent, professional and accountable.

That package should mean the new president faces much closer scrutiny than Blatter did, and have less influence over the day-to-day management of the organisation’s business affairs.

The reforms include term limits for top officials and disclosure of earnings, and a clear separation between an elected FIFA Council responsible for broad strategy and a professional general secretariat, akin to a company’s executive board, handling the business side. 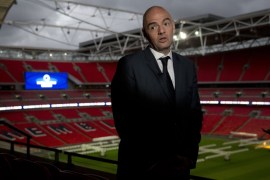 Gianni Infantino is running in place of the former UEFA boss who’s been banned from football during FIFA investigations.