AC Milan lifted the Italian Super Cup after 17-year-old goalkeeper Gianluigi Donnarumma’s save from Paulo Dybala secured a 4-3 penalty shootout win over Juventus, the first trophy the Rossoneri have won since 2011.

Mario Pasilic blasted home the final spot kick to give AC Milan a 4-3 victory on penalties after a hard fought 1-1 deadlock after extra time in front of a near-capacity crowd at the Jassim bin Hamad Stadium in Doha, Qatar.

Mario Mandzukic and Paulo Dybala missed their spot kicks for Juventus, with Gianluca Lapadula the only Milan player not to convert his penalty.

It is the second time Milan have beaten Juventus, who lead Serie A by four points, this season.

The victory was just about merited by Milan, who responded well after early Juventus dominance.

At that stage, it was all Juventus and it was not until the 36th minute that Milan had their first shot on target, a tame effort from midfielder Juraj Kucka.

Suso was a constant irritant to the Juve defence and set up several fine chances, including an 83rd-minute header for Carlos Bacca, who was denied by a great save by the evergreen Gianluigi Buffon, making his 600th appearance for Juventus.

Juventus also had their chances, most notably in extra time, but their failure to make it count took the match to penalties.

Gianluca Lapadula’s first penalty for Milan was saved by Buffon.

Mandzukic then fired a Juve effort against the crossbar before Donnarumma produced a superb one-handed save to stop their fifth attempt from Dybala.

That left Mario Pasalic to convert the winner with ease. 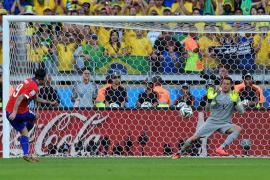 The psychology of penalty shootouts

Is a coin toss really fair and what is it about shootouts that strikes overwhelming fear in the hearts of players?