Cristiano Ronaldo capped a remarkable year by claiming a fourth Ballon d’Or award after leading Portugal to an emotional European Championship title and Real Madrid to a record-extending Champions League crown in 2016.

He scored 51 goals in 54 games for club and country, albeit his lowest tally since 2008, claimed another Champions League winners’ medal and lifted the European Championship trophy.

Ronaldo limped off midway through the first half of July’s Euro 2016 final, which Portugal won 1-0 after extra time against hosts France, but hobbled back on to the pitch to celebrate his country’s first major football title.

Six weeks earlier, after a fairly tame performance against local rivals Atletico in the Champions League final, he scored the decisive penalty in the shootout to hand Real their 11th European Cup.

“For me it’s a great honour to receive my fourth golden ball,” said Ronaldo.

“The emotion is like for the first one, it’s a dream come true again. I never thought in my mind to win four times. I’m so happy. It’s probably the best year of my career collectively, with Real Madrid and Portugal.

“Real are used to winning titles, while Portugal had never won a major title, so this [Euro 2016] title is special. I don’t want to lack respect to the Champions League but the title with Portugal is a level above.”

Ronaldo is one short of the record tally of five awards won by Barcelona’s Argentina forward Lionel Messi, who was second with the pair having taken the first two spots since 2011.

The Ballon d’Or merged with the FIFA World Player of the Year award from 2010 to 2015 to create the FIFA Ballon d’Or.

A total of 173 journalists voted but not national team coaches and captains who were also polled for the FIFA award.

Ronaldo, the highest-paid sportsman in the world, first won the Ballon d’Or in 2008 after Premier League and Champions League triumphs with Manchester United.

But it was only in 2013 that he added his second, and he made it a hat-trick the following year. 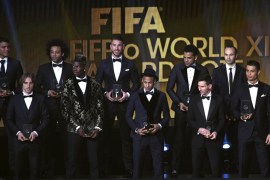 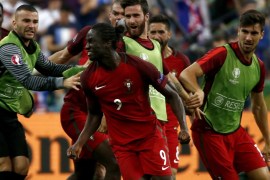 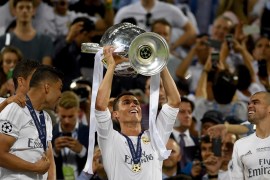