A plane carrying players from a Brazilian football team headed to Colombia for a regional tournament final, has crashed on its way to Medellin’s airport, killing at least 71 people.

Police officials said that seven passengers had initially survived but one later died in hospital.

The entire Chapocoense football team – and an accompanying entourage of staff – were among 77 passengers and crew onboard the aircraft. Local reports said a large number of journalists were also on the plane.

“There have been heavy rains day in and day out in the last week or so,” he said. “That could have played a big role in the crash, but that is still unconfirmed.”

Medellin’s Mayor Federico Gutierrez said that he was on his way to the region where the chartered aircraft was believed to have crashed shortly before midnight local time.

“It’s a tragedy of huge proportions,” he told Blu Radio.

It was not clear what caused the British Aerospace 146 short-haul plane to crash, but, as reported by Rampietti, Colombia had been hit by heavy rains and thunderstorms in recent hours.

READ MORE: Tributes to Chapecoense pour in from footballing world

It was originally reported that 81 people were on the flight, but four of the passangers never boarded because of visa issuea.

Data from the FlightRadar24.com website showed that the plane circling before eventually disappearing south of Rio Negro. Medellin’s airport confirmed that the aircraft, which made a stop in Bolivia, was transporting the first division Chapecoense team from southern Brazil.

The team was scheduled to play on Wednesday in the first of a two-game Copa Sudamericana final against Atletico Nacional of Medellin.

“This team in particular had been a miracle team,” she said. “The mood has changed from total celebration – to the fact that the team was in the finals – to total sadness here hearing the news of the crash.”

A video published on the team’s Facebook page showed players, filled with enthusiasm, preparing for the flight earlier on Monday in Sao Paulo’s Guarulhos international airport.

The sister of defender Alan Ruschel, who local media reported was the first survivor taken to hospital, tweeted her relief.

Ruschel had earlier posted images of his journey to Colombia on his Instagram account , including a photograph of he and his teammates onboard the plane.

Local reports said that goalkeeper  Marcos Danilo Padilha was another of the survivors, along with an unnamed air stewardess and a journalist.

After the incident, the team published an update on Facebook in which it said players, staff, journalists and guests were among those travelling with the club on the plane.

The team, from the small city of Chapeco, joined Brazil’s first division in 2014 for the first time since the 1970s and made it to the Copa Sudamericana finals last week by defeating Argentina’s legendary San Lorenzo squad.

Al Jazeera Andy Richardson described the team as “a rare model of organisational success” that was “lauded as an example of how to run a club”.

“They were seen as a real success story of the last three or four years in Brazilian football,” he said.

In a statement released on Tuesday, CONMEBOL, the South American Football Federation, announced that it had suspended all activities until further notice.

After news of the disaster broke, tributes poured in from the football community with teams and players from across the world offering condolences and tributes. 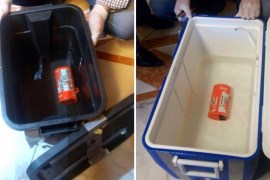 Data from one of the black boxes recovered from EgyptAir plane showed smoke alarms sounded on board, investigators say. 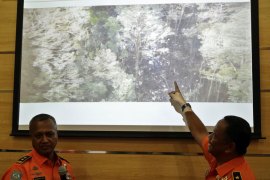 Search plane spots debris believed from crashed aircraft with 54 people on board, as rescuers prepare search. 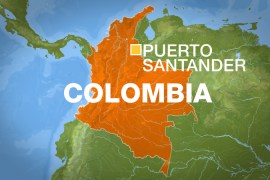 Colombia plane crash kills all on board

Ten people die after plane comes down in the Amazon jungle near Puerto Santander.