Ending more than a century of flops, futility and frustration, the Chicago Cubs have won their first World Series baseball championship since 1908, outlasting the Cleveland Indians 8-7 in 10 innings of a Game 7 thriller early on Thursday.

Considered “lovable losers” for generations, the Cubs nearly let this one get away too. All-Star closer Aroldis Chapman blew a three-run lead with two outs in the eighth when Rajai Davis hit a tying homer.

But the Cubs came right back after a 17-minute rain delay before the top of the 10th.

Ben Zobrist hit a run batted in double and Miguel Montero singled home a run to make it 8-6. Davis delivered an RBI single with two outs in the bottom half, but Mike Montgomery closed it out at 12:47am, and the celebration was on.

The moment it happened: pic.twitter.com/v5Cljhk1vZ

Cleveland was trying to win its first crown since 1948, but manager Terry Francona’s club lost the last two games at home.

The Cubs then ended more than 100 years of misery for their loyal fans. Third baseman Kris Bryant, one of Chicago’s young stars, began smiling even before fielding a grounder by Michael Martinez and throwing it across to Rizzo for the final out.

Zobrist was chosen as the World Series Most Valuable Player, a year after he helped the Royals to win the championship.

Zobrist was among the players brought to the Cubs by Theo Epstein, the baseball guru who added another crown to his collection. He also assembled the Red Sox team that broke Boston’s 86-year drought with the 2004 championship.

From Curse of the Bambino to the Billy Goat Curse, he ended another jinx.

While Cubs fans hugged with delight, but there was only despair for the Indians, who now have gone longer than anyone without a crown.

Twenty-one other teams had won the World Series since Cubs last were champions. They reached the top again on the 39,466th day after Orval Overall’s three-hit shutout won the 1908 finale at Detroit in a game that took 1:24.

At the time, Theodore Roosevelt was president, New Mexico, Arizona, Alaska and Hawaii were not yet states, and the first Ford Model T car was two weeks old.

The Cubs were last champions when Joe Tinker, Johnny Evers and Frank Chance won consecutive titles in 1907-08, until now the only ones in team history. The Cubs had not even reached the Series since 1945.

Thousands of blue-clad Cubs fans found a way to get tickets and appeared to number nearly half the crowd of 38,104 at Progressive Field. They rocked the joint when Fowler put Chicago ahead with the first leadoff home run in a decisive Game 7. 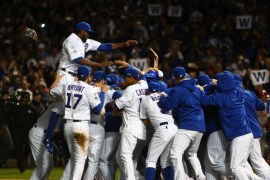 A 6-4 win over the top-seeds puts the Cubs into the series for the first time in 12 years. 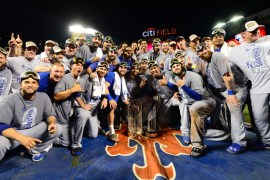 A 7-2 win over Mets in Game Five seals Royals first title since their 1985 triumph over the Cardinals.