The Palestinian Football Association has reiterated a call for FIFA to act against Israeli clubs based in settlements in the occupied West Bank ahead of a key meeting.

Six Israeli teams are based in settlements in Palestinian territory – considered illegal under international law – and FIFA is expected to discuss the issue during its executive committee meeting set for Thursday and Friday.

Palestinian Football Association head Jibril Rajoub called on FIFA to force Israel to either expel the clubs or relocate them inside Israel’s recognised borders.

“We are sending a message to the international community and the executive committee of FIFA that the time has come to solve this matter,” he said.

“The Palestinian football federation wants FIFA to tell these clubs to move to Israeli land or be suspended from FIFA,” Al Jazeera’s Bernard Smith said, reporting from the occupied West Bank.

“FIFA has asked the UN for clarification on the occupied West Bank and the UN has reminded FIFA that the occupation of this land is illegal under international law and without validity.”

Asked by AFP news agency what they would do if FIFA didn’t rule in their favour this week, Rajoub said they could take the matter to the Court of Arbitration for Sport (CAS).

“We will take it to [CAS] and demand FIFA respect international law,” he said.

The Israel Football Association has accused the Palestinians of dragging sport “from the football field into a political one”, saying it wants to develop the game as a “bridge connecting people and not as a wall that divides them”.

Wilfried Lemke, special adviser to the UN secretary-general on sport for development and peace, last week wrote to FIFA in support of the Palestinians’ case.

“All teams playing in recognised FIFA competitions should abide by the laws of the game,” he said in a letter. 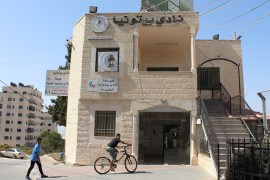 An open letter signed by more than 60 MEPs urges FIFA to prevent football from being used for territorial expansion.