An Iranian religious official has ordered football fans to refrain from joyous outbursts at a match against South Korea and instead solemnly chant for Imam Hussein ahead of the marking of Ashoura.

Many Iranians took part in mourning processions as they gathered at the 75,000-capacity Azadi stadium in Tehran on Tuesday to mark the eve of Ashoura, one of the holiest days in the Iranian calendar.

For Shia Muslims, Ashoura marks the death of Imam Hussein in the 7th century, and is traditionally a day of sombre processions through the streets, in which black-clad men beat their chests and heads in anger and despair.

IN PICTURES: Torches light up Tehran on eve of Ashoura

Consequently, it proved controversial with religious leaders when the Asian Football Confederation (AFC) match against South Korea was scheduled for the day before.

“Bear in mind that if football is going to be played on the eve of the Ashoura, the atmosphere of this match must be 100 percent in line with Ashoura,” warned leader Ayatollah Ali Movahedi Kermani last week during Friday prayers, according to the ISNA news agency.

“The entire stadium must be covered in black and shouts of Hussein must be heard constantly from the crowd. Instead of the clapping in these games, all should shout ‘Ya Hussein’,” he said.

“Spectators and players of both countries have been briefed to observe religious codes,” General Alireza Adeli, the interior ministry’s police chief, told the Tasnim news agency.

The AFC is highly sensitive to expressions of religious devotion during games and had asked for the black flags to be removed.

“We won’t do that. The Hussein banners are people’s beliefs,” said Iranian football official Mohammad Reza Saket, promising to pay any resulting fines.

South Korean players and journalists said they would voluntarily wear black armbands to show respect for the holy day.

The game is part of qualification for the 2018 World Cup, and South Korea is hoping to break a 42-year losing streak in Tehran. 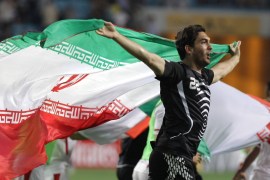 Lifting of sanctions will release at least $10m in funds owed to the country’s football federations. 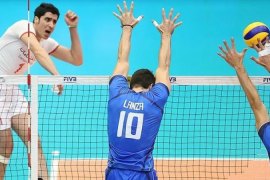