Gabon striker Pierre-Emerick Aubameyang narrowly edged out Yaya Toure to be named African Footballer of the Year at the Confederation of African Football award ceremony.

The prolific Borussia Dortmund forward, who received 143 votes to four-time winner Toure’s 136 on Thursday, is the first player from the central African country to win the award.

His accolade comes despite a year without trophy success. He was captain of the Gabon team that was eliminated in the first round of the African Nations Cup in Equatorial Guinea last year and his club finished seventh in the Bundesliga last season.

But Aubameyang scored 29 Bundesliga goals in 2015, including 18 this season plus a further seven in the Europa League. He is the first Bundesliga-based player to win the annual award first introduced in 1970.

“I thank the people of Gabon, this award is for them,” Aubameyang said in his acceptance speech.

“I want to thank my team mates in the national team and also at Dortmund. It is their work that helps me to score goals. For the parents of the youth of Africa, please give your kids a chance to realise their dreams.”

The 26-year-old is the second player born in Europe to win the award after Frederic Kanoute, the Parisian-born Mali international.

“I’m quite disappointed, but I don’t want to complain too much,” Toure said after the announcement.

“I just want to give credit to Aubameyang – you’ve been doing brilliantly well this year.”

Aubameyang’s father was captain of Gabon and played professionally in France. His mother is Spanish, he was born in France but raised in Italy.

The African Footballer of the Year is decided by a vote of coaches or technical directors of all Africa’s national teams.

Toure had won the award for an unprecedented four years in succession from 2011-2015 and was the favourite for a fifth after captaining Ivory Coast to the African Nations Cup title. 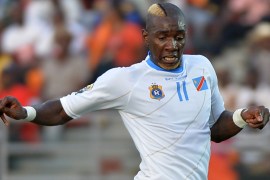