Brazilian police have charged US swimmer Ryan Lochte with making a false statement after he claimed to have been robbed at gunpoint during the Olympics in Rio de Janeiro.

He had initially said the men carrying police badges told the swimmers to drop to the ground and demanded money and their belongings.

When he refused, one of the men placed the pistol against the swimmer’s head, and he then handed over his wallet, Lochte had said.

“Ryan Lochte was charged with the crime of falsely reporting a crime,” Rio police said in a statement which added that the police had recommended the courts issue a summons for the Olympic gold medallist to be questioned.

“Once he is summoned, whether he turns up or not, the penalty is the same: one to six months’ prison,” the news website G1 Rio quoted police official Clemente Braune as saying.

“If he is summoned and does not turn up to the hearing, the trial will go ahead in the accused’s absence until the final sentence is given.”

Rio police chief Fernando Veloso had earlier told a news conference that the four swimmers fabricated the story when they tried to flee a petrol station after vandalising its bathroom.

A security guard confronted the swimmers and took out his pistol and made them sit on the ground. After paying around $50 in compensation for the damage, they left unharmed and returned to the athletes’ village.

Authorities had pulled Conger and Bentz off a plane about to leave Brazil for questioning related to the story but were later released after the pair retracted those claims.

Top sponsors such as Speedo and Ralph Lauren abandoned the US gold medallist this week.

“I over-exaggerated that story and if I had never done that, we wouldn’t be in this mess.”

Lochte could also face disciplinary action over the incident by USA Swimming and the International Olympic Committee. 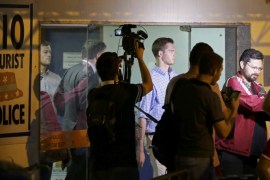 Brazil allows Gunnar Bentz and Jack Conger to fly out of Rio after lying that they were robbed during the Olympics. 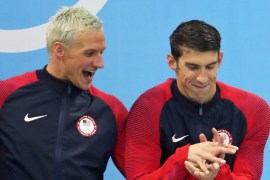 Rio police: US Olympic swimmers were not robbed

Brazilian police say four US Olympians, including Ryan Lochte, fabricated story about being robbed at gunpoint in Rio.