Star striker Lionel Messi will return to play for the Argentine national football team for the “love” of his country, reversing his decision in June to retire from international football.

The Barcelona forward had previously said he would not play for Argentina again following the team’s loss to Chile in the final of the Copa America in the US.

However, in a statement on Friday, Messi explained that he wanted to continue representing his country as he preferred “to help from within”.

“I consider there to be a lot of problems in Argentine football and it’s not my intention to create another one,” the 29-year-old said.

“There are a lot of issues that need to be resolved in Argentine football but I prefer to help from within and not to criticise from the outside. A lot of things went through my mind on the night of the final and I gave serious thought to quitting but my love for my country and this shirt is too great.”

The five-time World Player of the Year is now expected to be named in new coach Edgardo Bauza’s squad to face Uruguay and Venezuela for the 2018 World Cup qualifiers to be held in the first week of September.

In addition to the defeat on penalties to Chile, Messi has lost three other major finals with Argentina, two in the past two years including the 2014 World Cup final to Germany in Brazil.

Earlier, Argentina’s President Mauricio Macri had called on Messi to continue playing for the national side.

“It is a gift from God to have the best player in the world in a footballing country like ours,” Macri had said in June.

“Lionel Messi is the greatest thing we have in Argentina and we must take care of him.” 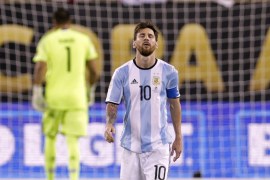 “I’ve done all I can, it hurts not to be a champion,” says Argentina superstar after Copa America final loss to Chile. 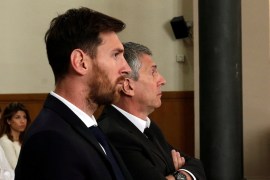 Footballer guilty of three counts of tax fraud, but is unlikely to go to jail as sentence can be served under probation.