Israeli authorities have prevented the head of the Palestinian Olympic team from leaving the Gaza Strip to be with his team in Brazil, according to a senior Palestinian official.

“Israel did not give Issam Qishta a permit to leave Gaza and therefore he was not able to join the rest of the Olympic team in Brazil,” Munther Masalmeh, secretary-general of the Palestinian Olympic Committee, told the Dpa news agency on Tuesday.

Emmanuel Nahshon, spokesman for the Israeli foreign ministry, said his government was working on allowing Qishta to join the rest of the Palestinian team.

“We do our best to let him leave as soon as possible,” he told Dpa.

Masalmeh said two others also from Gaza, a trainer and the deputy head of the committee, were given permits.

Gaza’s nearly two million residents are forced to apply for permits from Israel to travel to the West Bank in order to reach Jordan from where they can travel abroad.

The only other exit option for people in Gaza is through the Rafah crossing with Egypt, which is rarely open.

All the athletes were camped abroad for weeks and therefore were able to reach Brazil without problems, Masalmeh said.

‘Forced to travel without our equipment’

The 2016 Summer Olympics are due to take place in Rio de Janeiro from August 5 to August 21.

The Palestinian team taking part in the Games had to buy equipment and other things in Brazil after Israel had prevented entry of their equipment into the Palestinian areas, Masalmeh said.

Products and goods destined for the West Bank are shipped through Israeli ports. The occupied West Bank, including East Jerusalem, is landlocked and Israel controls all its borders.

The Olympic official said Israel had been holding the equipment, mostly donated to the Palestinians by foreign governments, demanding payment of taxes or entry fees and sometimes under claims of security.

“We got one shipment several months ago and we have not been able to bring it in,” he said.

“We were forced to travel without our equipment and to buy them instead in Brazil.”

Much of the strip has remained in ruins since Israel launched a 51-day war in the territory during the summer of 2014, leaving more than 20,000 homes destroyed or uninhabitable, according to UN statistics.

More than 2,200 Palestinians – mostly civilians – were killed during that war, according to the UN Office for Coordination of Humanitarian Affairs. Palestinian attacks killed 66 Israeli soldiers and six civilians. 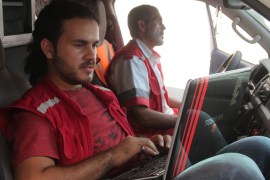 Ambulance: The Story of the 2014 War on Gaza

During the 2014 war on Gaza, a Palestinian filmmaker joins an ambulance crew as they try to save lives. 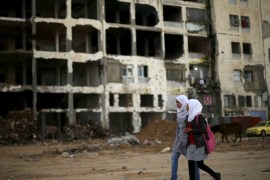 Who is stopping the reconstruction of the Gaza Strip?

Reconstruction has been slow, with the United Nations taking more than a year to rebuild the first bombed out home. 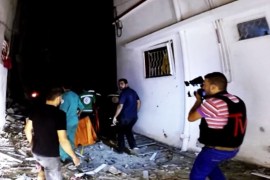 A Palestinian cameraman records the 2014 Israeli assault on Shujayea, including the final moments of his own life.